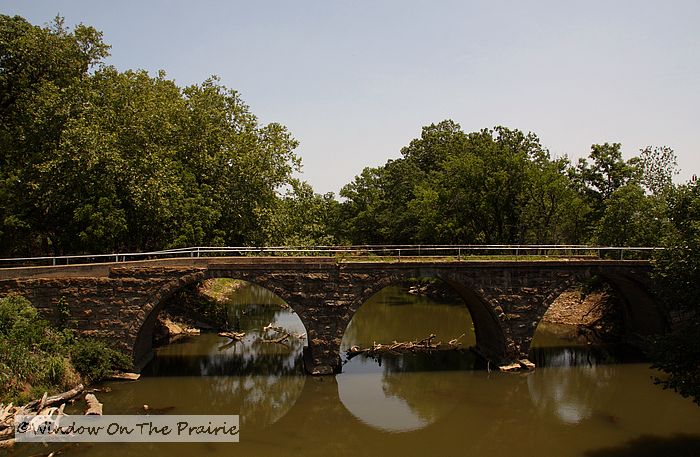 Harland and I were on our way somewhere a few weeks ago when Harland suddenly ( hold on to the oh crap handle ) made a turn off the blacktop and onto a gravel road. This is not an uncommon occurrence when traveling with Harland and years ago I would have protested, “hey, this isn’t the way to go!”, but I know now that he has a something he wants me to see off the beaten path, so I sat back and enjoyed the view. Mile after mile of pastures, hills covered with native lush grasses and dotted with wildflowers. Cattle and horses grazing.  Spring fed streams winding their way between enormous cottonwood trees whose leaves swing back and forth in the slightest breeze. Past old farmsteads with old barns and old pink rosebushes climbing the fences. At one point he stopped the truck in the middle of the road (no need to pull over as there is no traffic) to consult the map. I got out to find a location to – well, you know, I’d been drinking A LOT of water that day – and so I walked along the road looking for an ideal spot but saw only poison ivy. So I kept walking and walking getting further and further from the truck. Harland finally pulled up alongside me and asked,

“Was it something I said?”

Ha ha, what a riot he is. I explained I had to use the ladies’ room but couldn’t find a place without poison ivy, so I got back in the truck and crossed my legs. We continued for a few more miles and then stopped at an old stone bridge. Harland had been here several times before over the years, but I had not seen this one and was excited to get a look. Harland parked off the road in the shade of some trees. Perfect spot to take care of business, me on one side of the truck, Harland on the other. Hey, we were miles and miles from the nearest privy and it couldn’t wait. Once we got that out of the way, (whew), we explored the bridge. 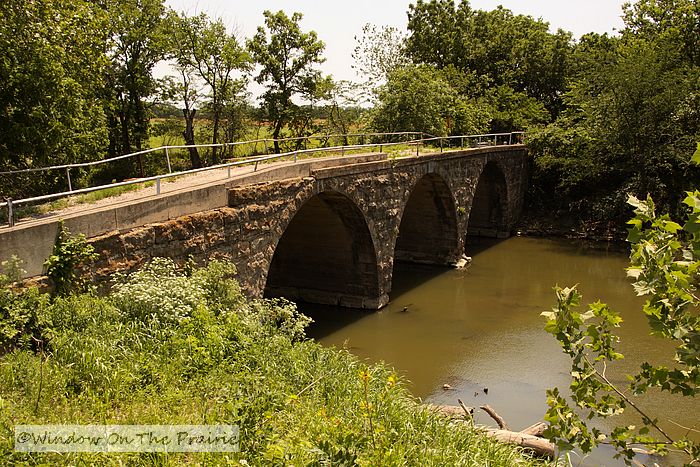 It was built in 1908 at a cost of about $2000 of local native limestone and concrete.  It was wide enough for 2 horse and carriages to pass each other, but in later years cars had to cross one at a time.

Did you know that the arch was first used in construction by the Romans as early as 2000 BC? 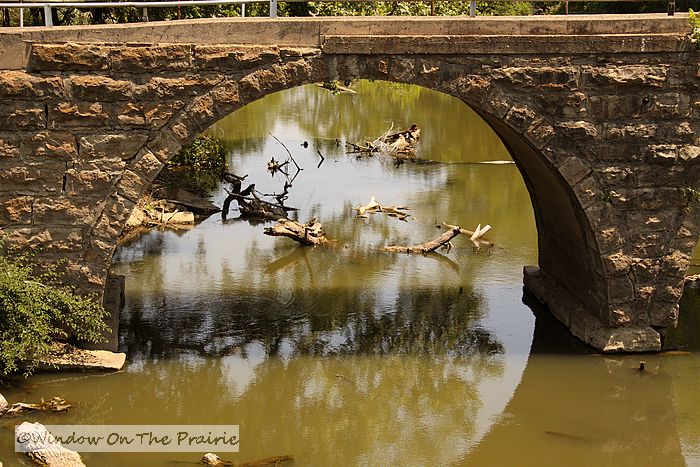 Some years back, it was determined to retire the old bridge and so the road was diverted and a new bridge was built alongside the old. There were once hundreds of these bridges throughout Kansas, but many have fallen victim to floods or demolished to make way for new bridges. This bridge is one of the longest stone bridges still standing in Kansas. It was put on the National Register of Historic Places in 1985 and is now on private land. As we took pictures of it, the owners drove past, a couple in a pickup truck with a large black lab on their way to go fishing, and stopped to chat for a while. They pointed out the best places to get good pics and encouraged us to walk the bridge as well, which we did. 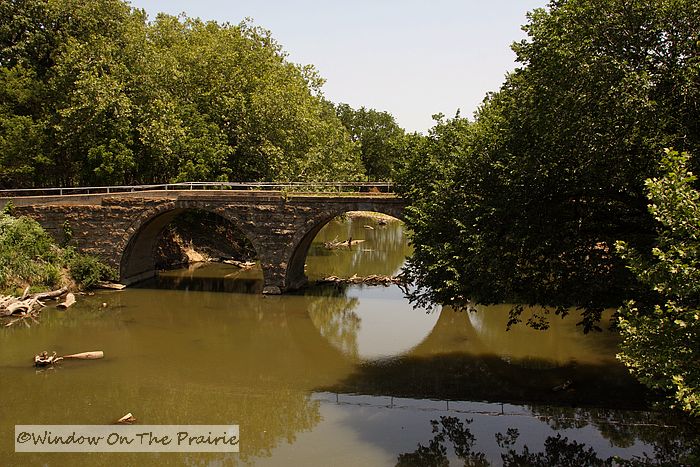 We stayed for a while thinking about when the bridge was young and in perfect condition. We hope that it will endure for generations to come, but know that a good flood will one day take it out. We take pics of every stone bridge we see knowing someday it won’t be there, but glad it will be preserved at least in our memories and on our computers.