What’s wrong with this picture? 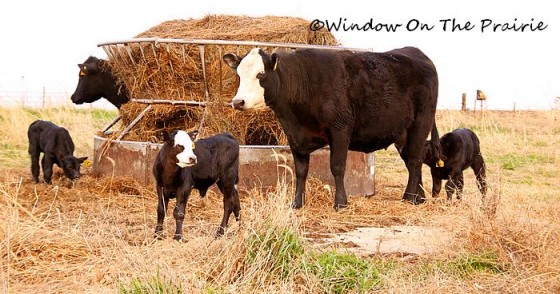 So there’s Clarabelle, the white-faced cow. And in front of her is her little white-faced calf, born in late March.  Just standing around enjoying the day…. except….

What’s going on behind Clarabelle?

What’s Eunice’s calf doing back there?

Nursing?  From Clarabelle? Can’t be…

Well….. yes, it actually can be. Eunice’s calf is a thief, nurses from whatever cow is nearby, usually Clarabelle. She puts up with it for a while, but then gets angry and pushes the calf away.

Thieving is not uncommon among calves and first-time mothers like Clarabelle. It’s up to the cows to refuse to allow other calves nurse from them, and experienced cows won’t let it happen, even for a second. I’ve seen experienced older cows lower their head at a calf and send it flying. They aren’t hurt, but they learn that they are not supposed to nurse from any cow but their own mother.

The other night, Eunice bawled all night at her calf.

All….night….long….. Mooo..moooo….MOOOOOOOOO.   Her udder was huge. Apparantly, her calf, who had probably been thieving milk from other cows all the previous day, was full and didn’t want to nurse from Eunice.

Eunice was borderline frantic and no doubt in pain. The next morning her calf must have finally nursed because all the bawling came to an end.

Right now all the first time cows are in a small pasture by themselves. But come May, they will go down to the summer pasture with the older experienced cows.

There, among older wiser cows, Eunice’s calf will finally learn to behave.

Tags: calf nursing from another cowClarabelleEuniceWhat's Going On?