This past Saturday, we worked cattle, one of our least favorite things to do.

Oh, the irony. Last Saturday, Harland and I attended the Statehood Ball in our finest duds where we danced the evening away.

And a mere week later here’s Harland in his farmer attire heading to the farm to muck around with uncooperative bovines for several hours. 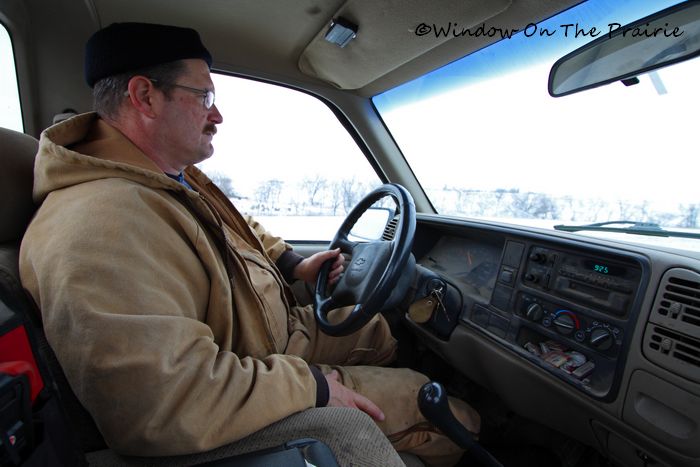 See that smile on his face?

No? Me neither. His non-smile was prophetic. This was to be one of our rougher days of working cattle.

Gerald and Ramona (Harland’s brother and his wife) and Andrew  (Harland’s nephew) met us at the farm. The goal of the day was to give shots to the pregnant cows and heifers who are due to start calving in just a few weeks. The shots prevent scours (really bad diarrhea) in their calves.  But first we had to get the girls into the lot and then drive all 70 them into a sorting pen. After much chasing and yelling, we finally breathed a sigh of relief as we closed the gate behind them. Then we drove them into the smallest sorting pen to await their turn at being driven into the chute for their shots.

Two of the bulls were left out in the lot, and stirred up by the activity and the longer days hinting at spring, they began head butting, shoving and pushing at each other. Harland was preparing the syringe and the rest of us were chatting when we heard a crash.

I looked over just in time to see one of the bulls shoving the other through the chained gate(bang! crash!) and into the sorting pen where they continued to fight with one another. Great – two 1500 pound teenage boys. We were reluctant to chase them back out considering how large and worked up they were, and one of us quipped, “Aw leave them there – people in some countries pay to see this action”.

But Harland finally chased them out and told them to knock it off. They had broken the gate chain and damaged the hinges – something else to add to the list of repairs. Yay…  Harland got a bigger chain and used it to secure the gate.

Then we started working the girls. Gerald and Andrew cut 5 or 6 cows at a time out of the pen (more yelling and hollering and chasing) and with Ramona, Harland and me yelling along behind drove them into the chute (think narrow hallway where no one can turn around, kick or trample us). From outside the chute, Harland jabbed the syringe into everybody’s butt. 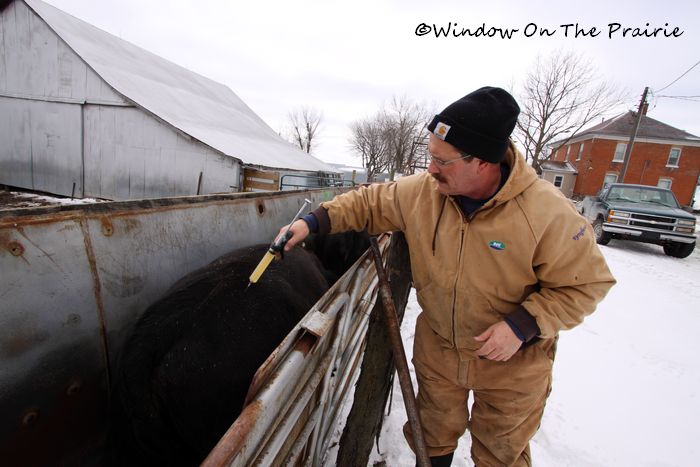 Some cows decided they didn’t want to get their shots and tried to climb up the back of the cow in front of them, or go over the wall. It’s not fun to see a 1000 pound animal heaving itself up over your head trying to escape. But no one got out of the chute.

After each group got their shots, Harland looked for missing eartags and replaced any that were gone. Cows hate to have their ears messed with more than anything. They toss their heads about or bury them beneath their neighbor’s butt trying to avoid Harland. But despite their evasive tactics, he managed to get eartags into anyone’s ear that needed one.

After each group was finished, Harland let them out the chute into a separate lot, and then Gerald and Andrew drove in another six cows. And so it went. Sorting, shots, eartags. Repeat. 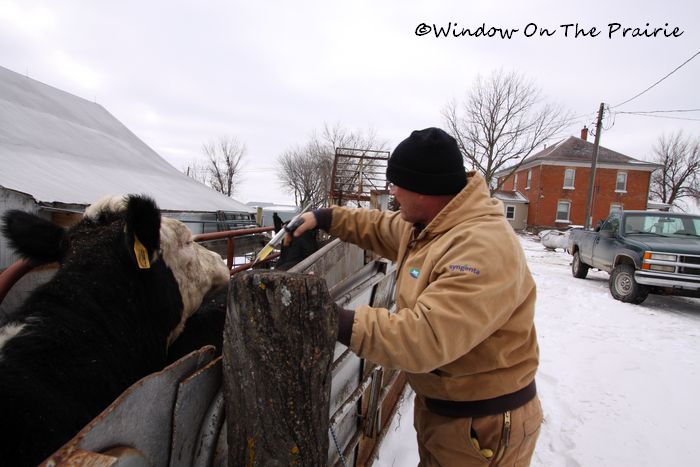 Early on when the guys were driving a group into the chute, one cow decided to make a break for it by jumping over a gate into the pen with the vaccinated cows. Jumping isn’t the right word though, it was more like she slowly lifted up her front end over the 6 foot high gate coming to a stop when her large pregnant middle caught atop the gate, all four feet dangling above the ground. She looked around at us asking for help.  But with her precarious 1000 pound bulk teetering above us and her legs waving about, we didn’t dare get near her for fear of injury. We watched nervously as she finally slipped over the top and dropped to the ground on her feet. Whew…

She has a history of being a jumper since we bought her last spring and Harland’s probably going to sell her now. Having a jumper around is dangerous for everyone, not to mention a royal pain in the butt.

We got back to work, sorting, shots, 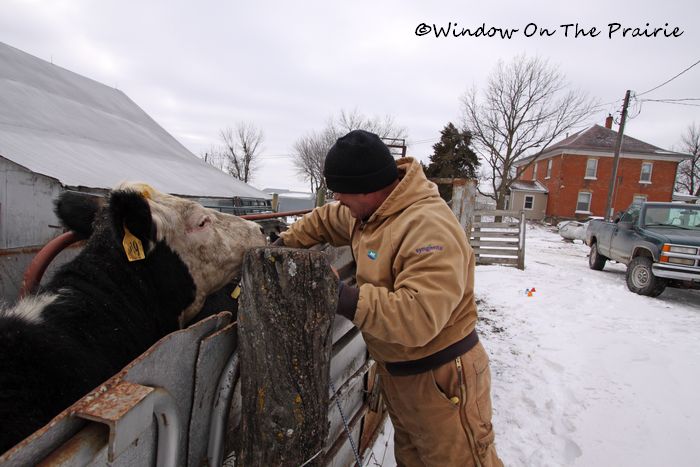 eartags, but then somebody hollered and I looked over to see Gerald hugging a gate in the sorting pen and looking pale and stiff.

He had been kicked.

Some 1000 pound b**ch had caught him in the hip – full force with her back hoof.  We all ran over. Andrew and Harland helped him out of the sorting pen and sat him down on an overturned protein tub. He went pale and I got him a drink. When asked how much it hurt, he said it wasn’t as bad “as the time that I-Beam fell on me“.  Okay…… We were concerned but he didn’t like us fussing over him so we went back to work, checking on him every once in a while.

Finally everyone had their shots and it was time to sort the heifers from the cows. The heifers need to be moved to the lot near our house so we can keep a close eye on them, while the cows will remain at the farm just up the road from us. Heifers are 2 year old females, pregnant with their 1st calf, and since heifers are more likely to have calving troubles, we keep them near our house and check them often.

Gerald was on his feet by the time we started sorting the cows and heifers, but not in any shape to help, so Ramona and I got into the pen with Andrew and Harland to sort off about 12 heifers from the 60 cows. Harland cut each cow out of the group and drove it towards the gate as Andrew opened the gate for the cow to go into the lot. For Ramona and me, we had the job of keeping each of the 800 pound heifers from going out the gate by standing in front of them in as threatening a manner as we could and blocking their way to the gate. This didn’t work very well because occasionally the entire herd ran towards us and instead of blocking, Ramona and I ran out of their way to avoid being trampled. Sometime during this fun, one of the heifers decided she’d had enough and jumped out of the sorting pen and into a neighboring pen holding last years calves.

Well crap – anybody else want to misbehave today?!?!?!?!?   Fine, whatever – we decided to deal with her later.

We continued to sort off heifers and finally got that job done. Then we moved the cows out of the lot and into the alley. Then we moved the calves, a herd of 60 bucking and winging 1-year old teenagers back into the lot. It took two tries to get this done because as they approached the gate opening, they got skittish and all 60 broke into a run lapping the pen. She we got behind them again and this time they went on through and into the lot.

Gerald hobbled to his truck and headed home with Ramona. Andrew too headed out.

And Harland and I went home for lunch.

Last spring’s calves will be sold next week, the heifers will be moved to our place, and soon spring calving will begin.

After pondering the day’s events I asked Harland how he thought the day went. His reply?