(To see all the earlier posts about our siding project, click HERE.)

So far he’s finished the north side of the house, 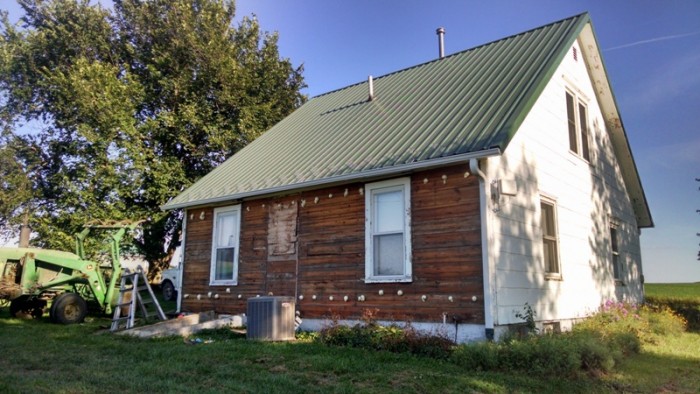 and will finish with the east side today. 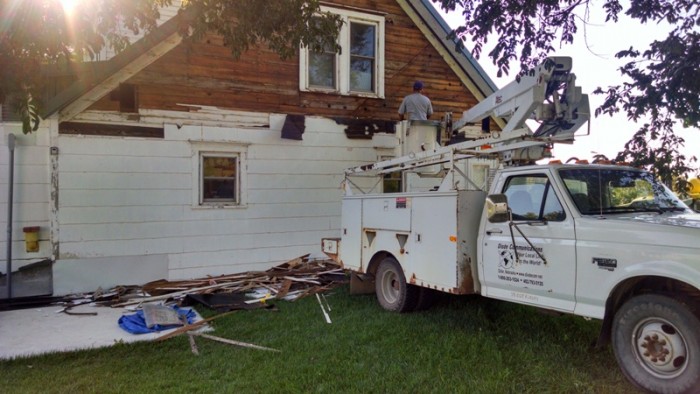 There are two layers of siding: wooden clapboard painted white, and on top of that, some sort of manufactured slate type siding, also white. 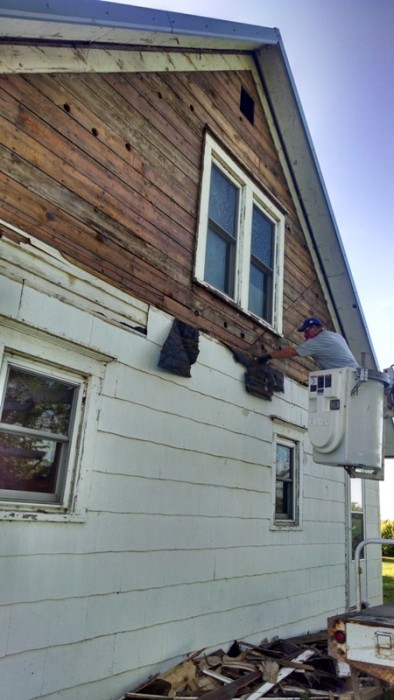 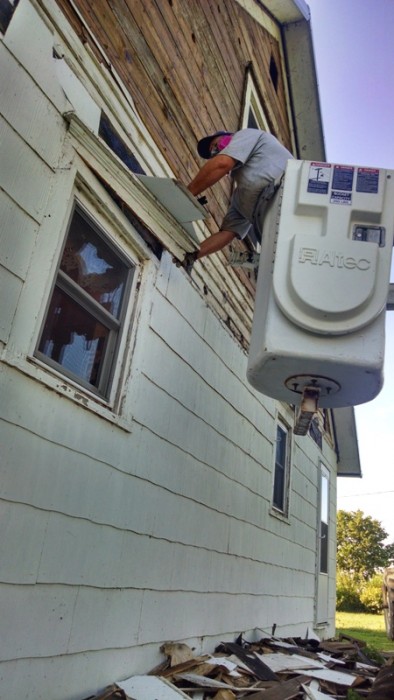 The clapboard is the original siding to the house, probably about 100 years old, and the slate was added as part of a remodel some time later, we’re not sure when. Before the slate was added, they drilled two rows of holes, each about three inches in diameter, and blew in insulation. Before that, the house had been un-insulated, but since they burned coal back then, they probably didn’t feel the cold too bad. Harland has been filling in the holes with triple expanding foam.

So far we’ve uncovered a few surprises. Looks like there used to be a door on the north side of the house. 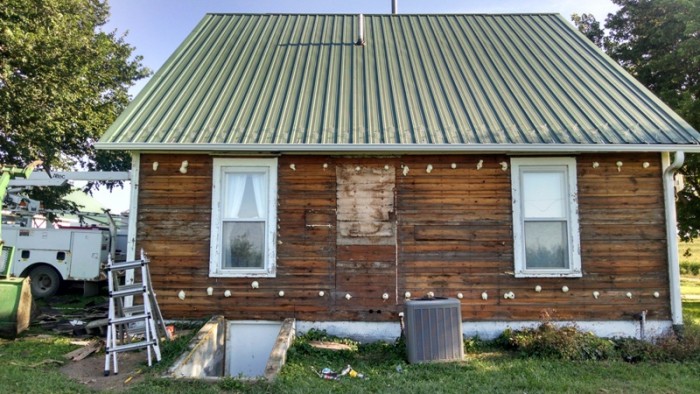 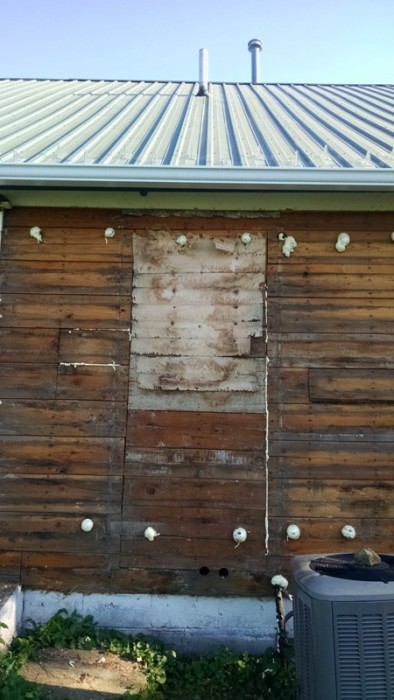 We didn’t know that was there. At some point they stopped using it and boxed in the doorway.

And these two window openings on the east side used to be tall tall narrow windows, 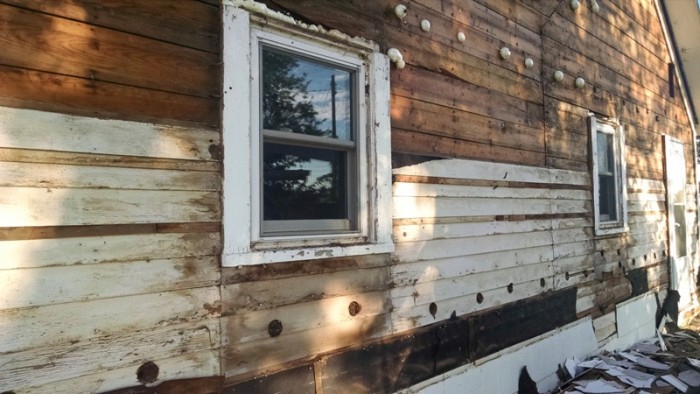 and at some point the openings were modified and new small square windows put in.

The biggest surprise though, is that our house used to be just one small room. Below, you can see the outline of what would have been the roofline and exterior wall of the tiny house.

Looks like it was really small, like one of those houses built by the first settlers you see in old pics. 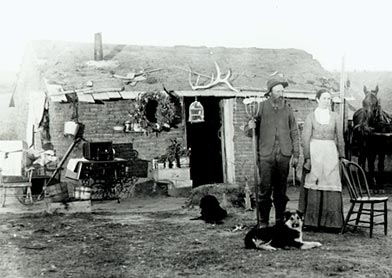 The one above was made of sod, but you get the idea here of how tiny early settler’s houses were.

The original house would have included our present day bedroom and bathroom, both of which are small rooms. If it was like other settler’s houses of the day, it was probably just one large room that served as kitchen, living area, and bedroom. We wonder how old this original structure was. The earliest settlers we know of were Pearl and Faye Benson, and they moved onto this property in the early 1900s. 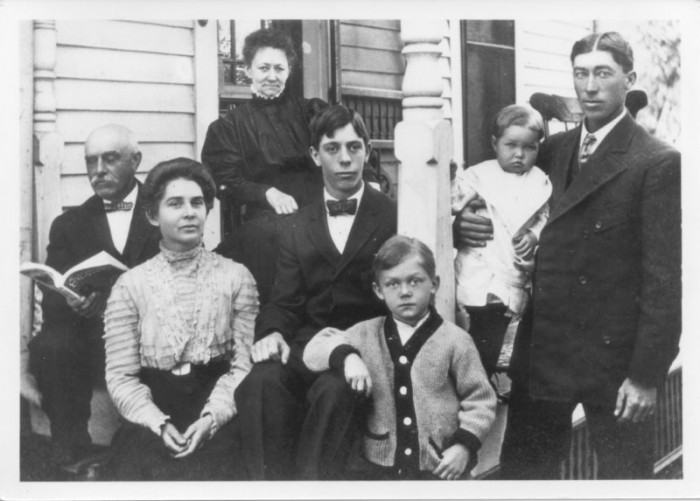 This area of Kansas was settled in the 1870s. Does this house go back that far? I need to get to the courthouse and look at the old plat maps. Been meaning to do that for a long time anyway.

Harland’s been using the bucket truck (what a wonderful thing to have around the farm and home) to access the higher siding. After he peels it off the house and drops it onto the ground. Then he puts the old siding into the bucket on the tractor and hauls it away. 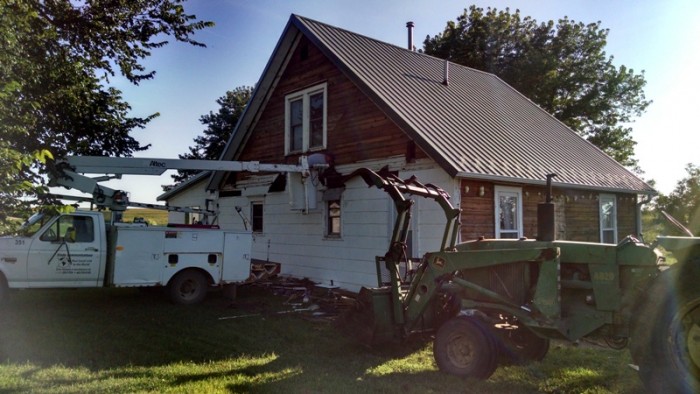 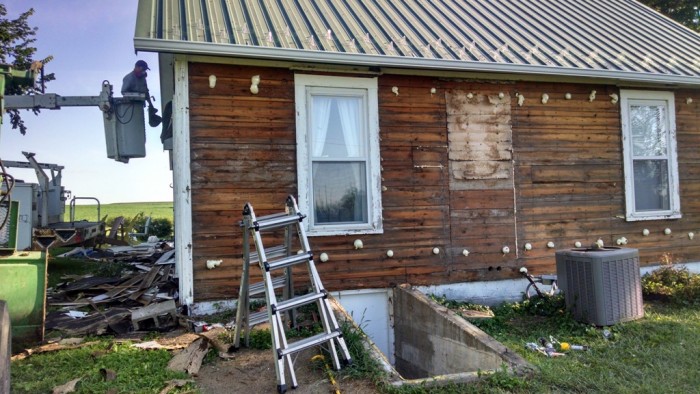 Noisy too, lots of banging.

And how are Muffy and Kitty dealing with the disruption to their normally quiet lives? Muffy has been following along from window to window soaking up all the action. 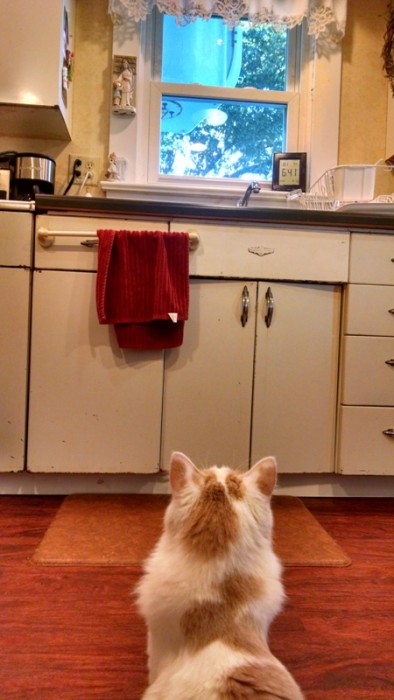 “NEATO!! Wish I could ride in the bucket truck!”

And Kitty?  Well, our sensitive girl has been hiding under the couch, poor thing.. Didn’t get a pic of her there as it’s kinda dark. She’s rather embarrassed to be so wimpy around Muffy. He understands though, and ducks his head under the couch every once in a while to see how she’s doing.