This week Harland’s been planting corn.  He starts about 7:30am and keeps at it until 9pm.  He even eats lunch in the field. No time to waste this year. Corn is usually planted in early April, but the rains and cold weather kept him out of the field until now. He did get in a couple days planting about 3 weeks ago, but it never germinated due to the unseasonable cold temps, so he thinks he’ll have to replant. Two days of work, a lot of corn seed and tractor fuel:  down the drain. Ah well.

Anyway, I’ve taken over the evening chores until he’s done planting. When I get home from work about 5:30pm, I change into my chore-doing togs and head out. Last couple days it’s been about 80 degrees and very windy. So I put a head scarf on to keep the hair out of my face, 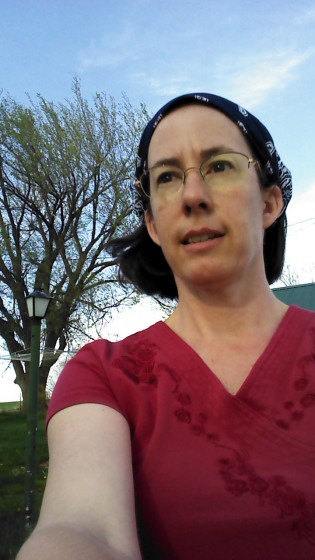 and I wear shorts. 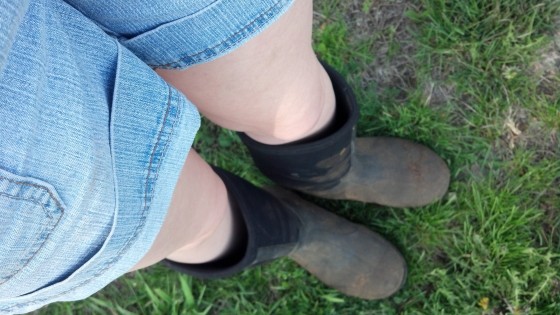 Check out my mayonnaise-colored winter legs coming up out of my chore boots.. Good thing our cows don’t write a fashion column.

And we’re off. First we’ll check the heifers. They’re in a lot near the house. There are only 3 left who haven’t calved. Of these, only one of them is close. 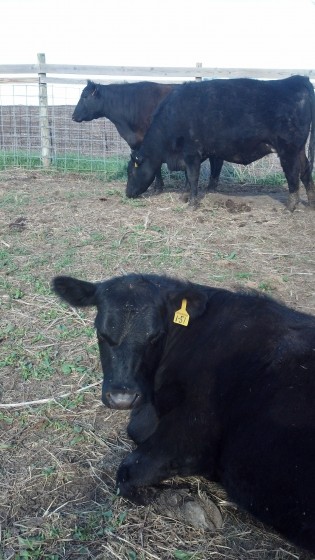 Of course, she’s the one back there in the corner that we can’t see. I wait a while hoping they’ll move so I can get a look at her butt to see if anything is going on. But unlike earlier in the spring when they were scared to death of me and ran away, now they are used to me, and I don’t get much more than a passing glance. Sigh.  If only we could train our cattle to turn their butts toward us, checking for labor would be so much easier.

So I shimmy through the barbed wire fence into the field next to the lot and walk around behind her. 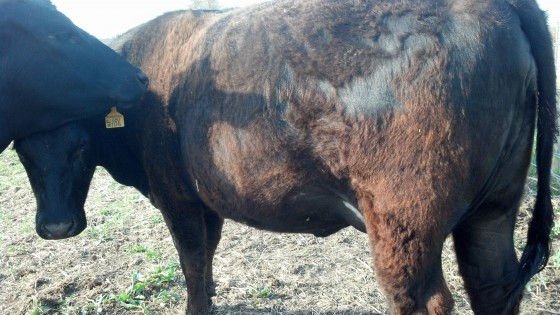 No amniotic sac or feet protruding. Nothing happening here. Poor thing. She’s so big and when she take a step she acts like she’s walking on nails.

On to the next chore.

On our drive up to the farm there on the right, you can see the spring pasture where the cows and calves were for the last couple months. 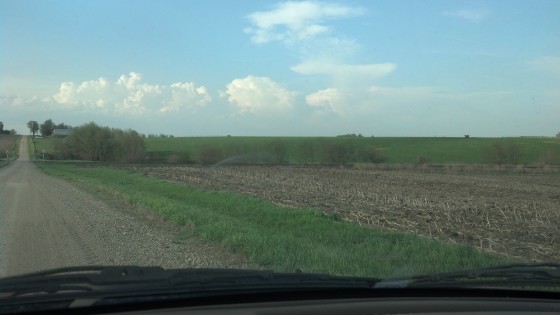 It’s a big empty now. We moved them to the summer pasture over the weekend. (Pics and video of the move to come later.)Kinda sad not to see the calves playing here as we drive up the hill.

As I get out of the car, I catch sight of Harland over there on the distant hill planting. 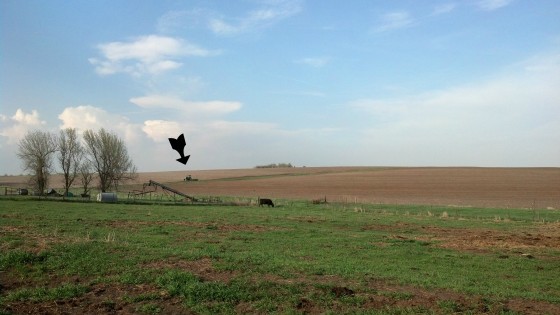 Up and down the hill. Up and down, up and down. He listens to audio-books to stave off boredom.

I head to the lot to check on the one cow who’s not calved yet. But before we get there, I see Mrs. Bunny. 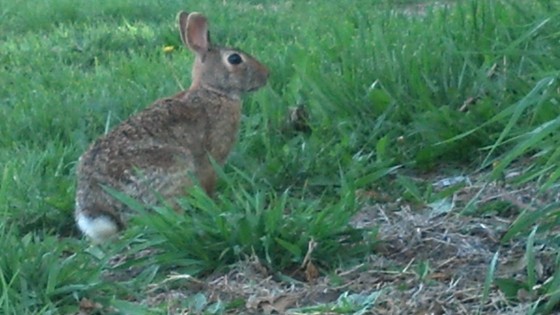 There are a pair of bunnies here who are practically tame they’re so used to seeing us. I can get within a few feet of them these days.

Down the alley to the bottom of the hill is where the pregnant cow is. 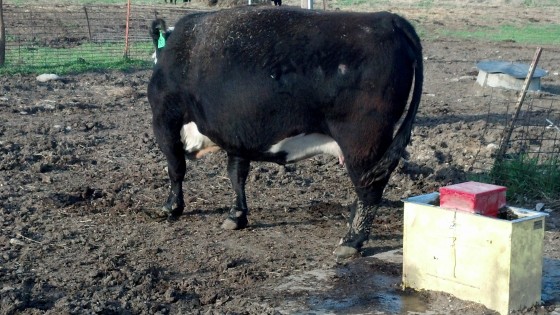 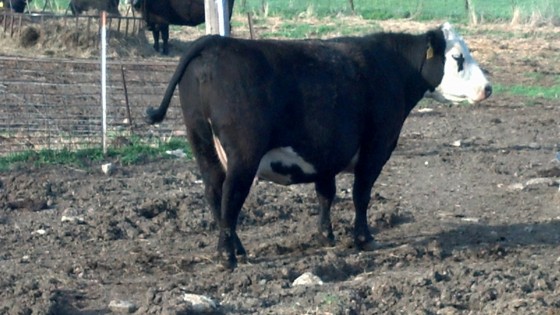 She too is as big as a barn, but no amniotic sac or feet protruding here. Supposed to get down to 30 degrees and snow for the next few days. The heifer at our place and this cow are probably waiting until then to calve.

Back up the hill to the grain shed to feed the bulls. Mr. Bunny runs out in front of me. Silly bunnies.

The bulls get five gallons of grain each day. 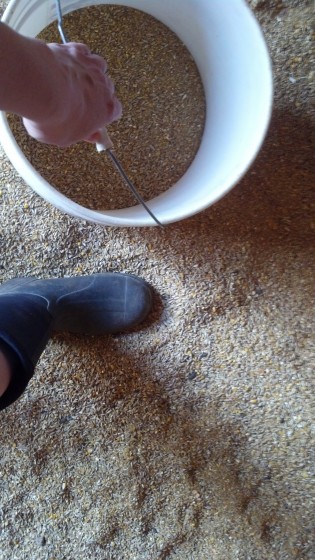 We’re getting them in top condition for the important job ahead: Their assignment starting June 1 is to get all the cows pregnant within 60 days. No pressure guys. 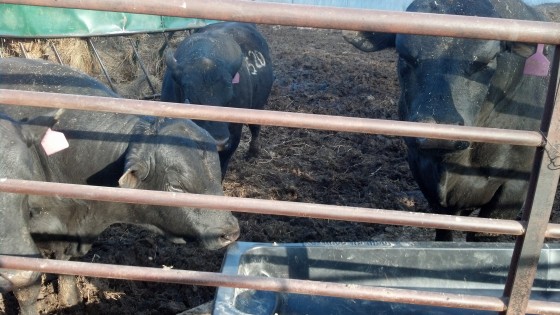 As I pour the grain over the gate into the trough, they stuff their heads in and some of it gets dumped on their heads. 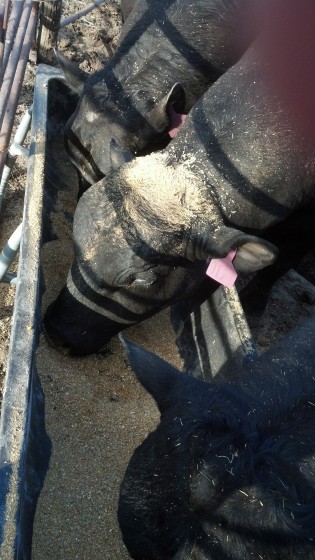 I watch them eat for a while. Something relaxing about watching cattle eat. Hmmm….. I’m hungry.

I head back to the grain shed to put the buckets back. Another bunny runs out in front of me. I’m beginning to think there may be more than 2 rabbits here.

One more look at Harland: 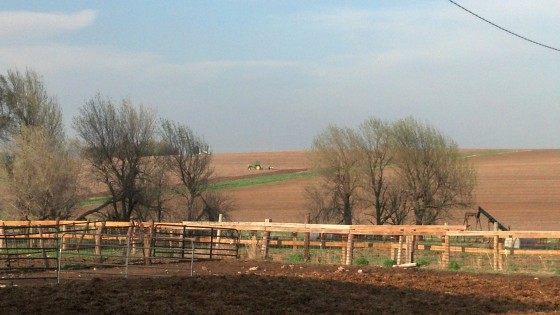 See him over there on the hill between the trees?

I head for home where I put the car into the garage, which used to be a milking barn in the old days, and then I walk back to the house. 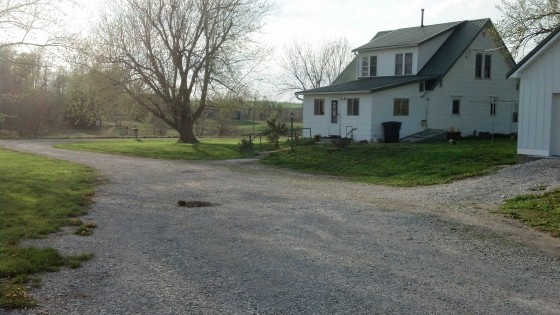 I pause to gaze on the evening light coming across the green lawn.

But the wind is still blowing about 30 miles an hour. Argh.  Into the house I go.

Kitty meets me at the door. 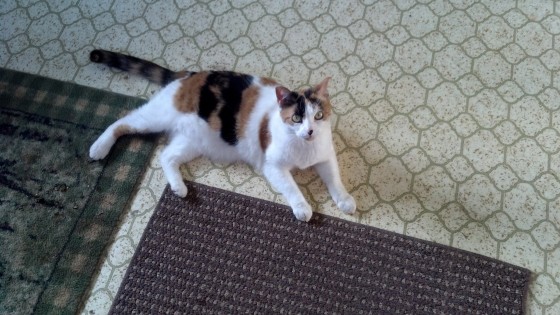 “Where have you been? It’s WAYYYYY past my milk time, woman.” 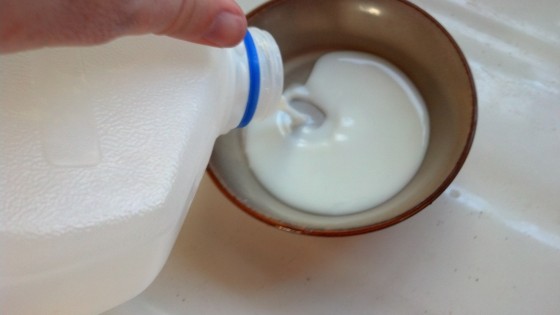 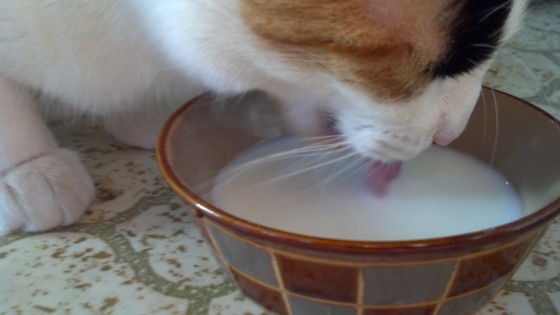 As Kitty drinks her “crappy 2% milk” I start dinner.  Nothing special – just one of those box pasta dinners with chicken. I make a salad.

After eating I head back outdoors to water the grass seed I planted yesterday in the lawn. We have some bare patches after last summer’s heatwave and drought. Then I water the lettuce seed in the veggie garden. The potatoes are up. Then I get the mail and head back in. I sit down a watch a little tv until Harland comes home about 9pm. I heat up his supper and we chit chat while he eats. Then it’s showers and bed.

We leave the bedroom window open. Kitty loves to sit on the windowsill and look out into the night.