For some time now Harland and I have talked about wanting to get some company for Kitty. She is alone most of the day and also when we get away on our trips. When we first got her , she didn’t like us or care if we were around, and so it didn’t matter if we were home or not. But Kitty has softened with age and now enjoys our company and misses us when we’re gone. When we return from a trip she clings closely to us for several days, not letting us out of her sight, and calls out to us if she can’t find us. If we return from a really long trip, her voice is hoarse from meowing repeatedly for us in our absence.

Problem is that Kitty is not the most sociable cat in the world. She likes only me and Harland and doesn’t like the barn cats at all. Since we picked her up as a stray, we don’t know if she has ever been around other cats. Still – we think she would benefit from company if she could get to know and get along with another cat.

Which brings us to last Thursday, Thanksgiving day-

We visited my family in Missouri, traveling there on Thursday, and returning home on Friday. On Thanksgiving day, we were driving down a blacktop road in the middle of nowhere out in the country headed to my sister’s house for Thanksgiving dinner, when we noticed what appeared to be a dead animal in the middle of the road. Harland swerved to miss it and as we got closer we saw that the “dead animal” was staring at us as we passed. It was a small kitten snuggled up against what appeared to be a dead kitten who had been hit on the road.

We turned around and went back determined to rescue the live kitten before it too got hit. But as we approached the spot again, there was nothing there, dead or alive. Harland pulled the truck over to the edge of the road and we started looking. He found and grabbed one kitten hiding in the ditch, while I grabbed another one. A third one ran out of the ditch, up a driveway and into a barn on an old abandoned farmstead.  So clutching our kittens, we began to search the barn. Every time we got close, the third kitten ran away, terrified. But he called plaintively for his brothers and they answered, so he didn’t run too far away.

Finally after 15 minutes of trying to catch him and realizing we may have to leave him behind, I knelt down behind a low barn wall holding my crying kitten above my head to lure in the wayward kitty. He got closer and closer  and closer….and….

Once caught however, he began to SCREAM bloody murder which caused the kitten I was holding to panic and bite my finger causing me to yell!!!

I handed the screamer off to Harland and he immediately bit into Harland’s shoulder, causing Harland to start yelling as well!!!!

Holding tightly onto the three kittens, and comparing wounds, we finally headed back to the truck.  After I got in, Harland gave me his two kittens and I placed them in my lap along with the third I was carrying. The first two we had caught were short-hair kittens, and the third one we chased around the barn(the screamer) was a longhair. All of them were pale yellow with white legs and faces. Surprisingly, they traveled very well and didn’t  move much as we continued on our way down the road. They were shivering and malnourished. I could feel every rib, and all along their little backbones their vertebrae stuck out.

When we got to my sister’s house for Thanksgiving dinner, she loaned us her pet carrier and we placed the kittens inside. We gave them some milk and cut up some turkey for them too. They wolfed down both. We gave them a little litter box and container of water.

We stayed at a B & B that night and the owners kindly let us bring the kittens in to our room so they could stay warm through the night. The next day we got them some dry kitten food. They wolfed that down as well. As we drove back home, the interior of our truck was not very sweet smelling. If food goes in, something has to come out the other end ya know. We repeatedly opened the windows all the way home, a three hour drive.

Once home we set the kittens up in a pen in the garage and turned on the heat for them. They slept the rest of Friday and most of Saturday, getting out of their little bed to eat or use the litter box and then return to bed. Finally Saturday night, the two shorthair kittens began to play with each other. By Sunday, they were running laps around their pen having the time of their lives. But the longhair kitten (the barn chasing screamer), who we had nicknamed Hissy for his charming habit of hissing at us constantly, sat in bed, lethargic, uncaring about the other kittens play. I held him a lot and talked to him. Surprisingly for all his hissing, he turned into a pile of jelly when held. He purred like a little freight train and reached his little paw up to touch my face. Soon, instead of hissing when he saw me, he purred. I began to think of how hard it was going to be to give him up for adoption with the other two.

Still feeling poorly Monday morning, I took Hissy to the vet. When they asked for his name, I gave him one, Muffin.

“Oh great”, I thought – “I broke the rule of never naming an animal I don’t plan to keep.”

At the vet they gave him a wormer, and also a 7 day supply of antibiotics. They also gave me a wormer for the other two kittens. Muffin meowed sadly at me from inside his carrier all the way home.

Monday night Harland took pictures of the kitties for use to advertise their availability to be adopted.

Here are the two short-hairs: 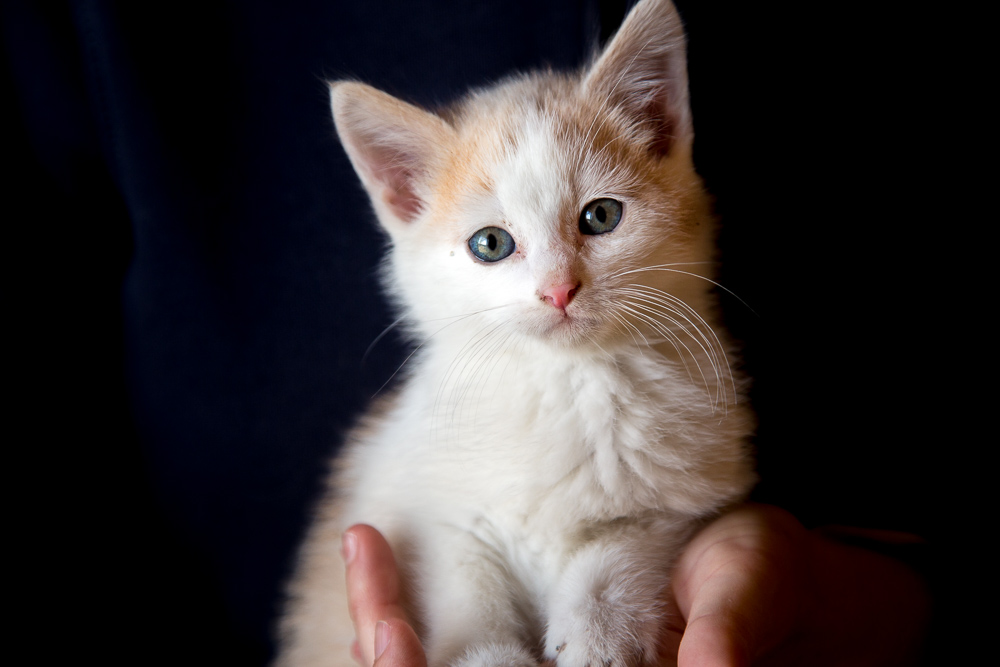 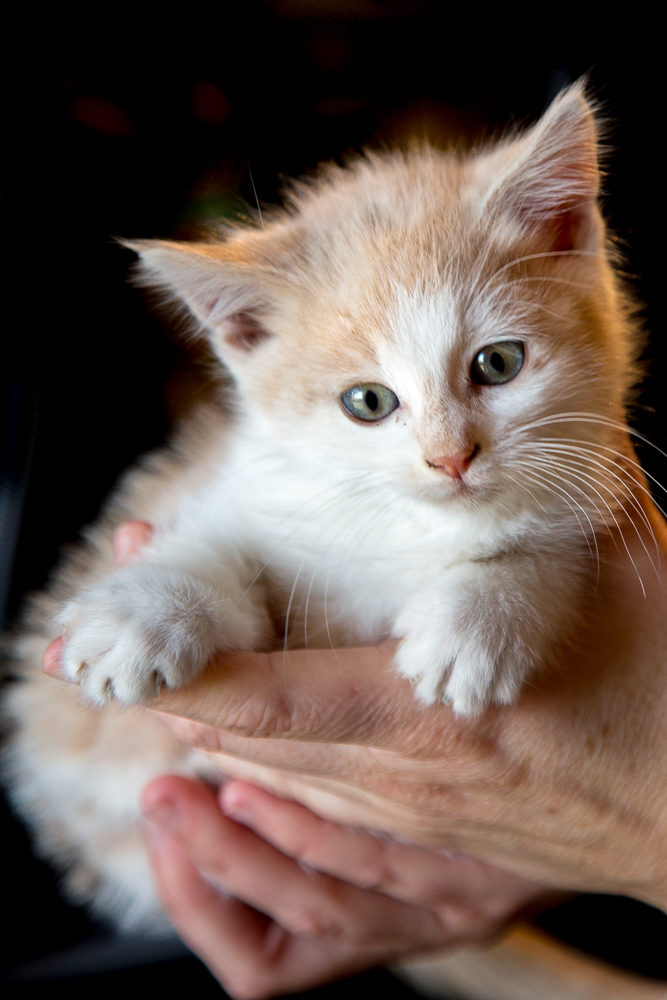 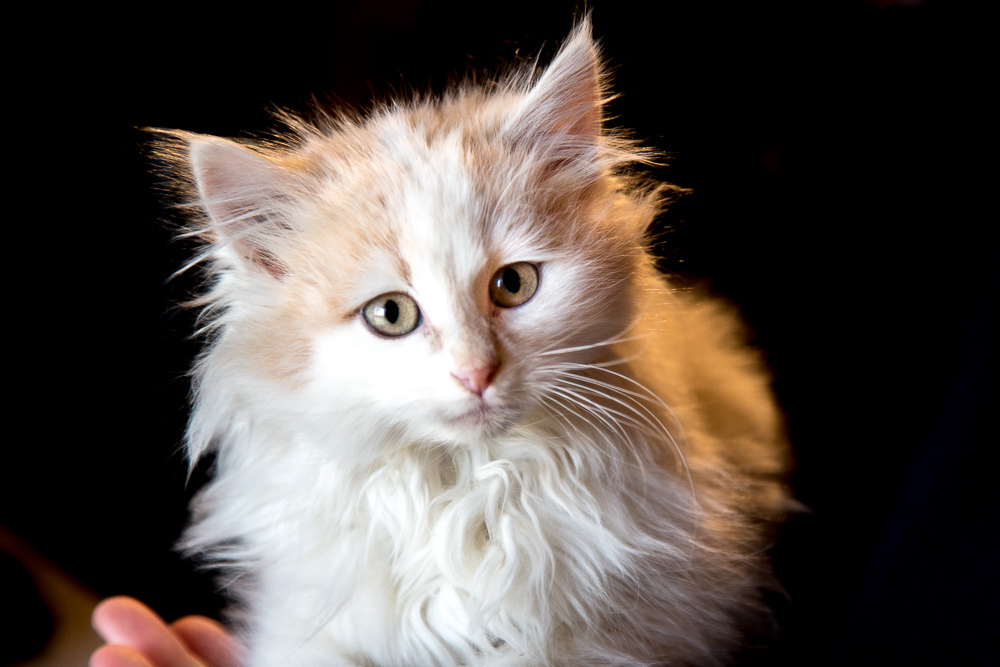 Monday night, I finally asked Harland what he thought about keeping Muffin. He said it was ok with him, but it would really be up to Kitty.

Since Muffin’s vet visit Monday morning, I’ve watched over him to see if he put on any weight like the other two have done, and to see if he would start playing.  I’ve spent a lot of time holding him and looking into those hazel eyes.

Finally, last night, I watched as he tentatively reached out to his brother’s tail with his paw to bat it around.  Then he got a case of the sillies and started rolling about in his bed and hopping about a bit. I smiled down on him with great relief. He’s going to be ok.

In about a week or so, the two shorthairs will be available for adoption. They’re both eating well and putting on weight, so they should be ready to go by then. I’m getting Kitty used to Muffin’s odor by letting her smell my jacket after I’ve held Muffin. She’s fascinated and makes weird faces as she sniffs intently.

I’m not sure how to go about introducing the two of them together. I’ve heard that they should get used to each other’s odors and it’s a slow process to get two cats together. It may not work. Kitty’s has been queen of her castle for seven years now. I hope she’ll surprise us and let him into her domain. The company would do her good, and I would hate to give Muffin away at this point. He’s wormed his way into my heart.

Anyone out there ever introduced two cats to each other?  Any advice would be certainly appreciated.