All is well in our feline world. 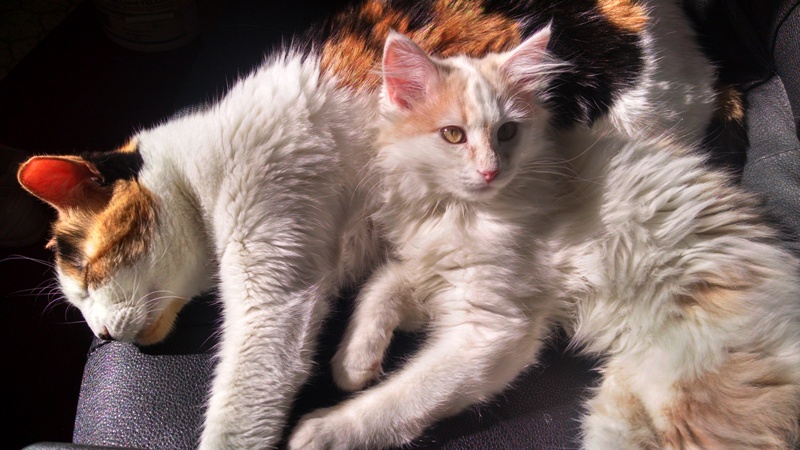 Kitty and Muffin have settled into a daily routine consisting of (in no particular order):

Kitty has assumed a motherly role for the squirt. She’ll share her food with him, come running if he is in distress to console him, clean him regularly, and sit by looking quite proud as he plays nearby. She lets him do whatever he wants to her – jumping on her, waking her up to play, biting her – but she has one limit: her tail. She won’t let him play with it. So of course he seeks every opportunity to grab hold of her tail -much to her irritation.

Something Muffin started doing recently has been quite a surprise to us. Neither of us has ever had a dog that would do this, let alone a cat:

Now you might ask how we trained him to do this. Ah, well…..we didn’t. He trained himself. One day he began to bring me his “dead” toy mice dropping them at my feet and crying. I was kinda dense at first and didn’t get what he wanted. But one day, I threw the mouse across the room. He ran after it and brought it back to me again. And that’s how it started. He will play fetch until our arms tire if we indulge him. He just loves it. Silly boy.

The silly boy is taking a trip to the vet today for his second round of vaccinations. The doc will also be checking on his, ahem, boy parts, to see if he is ready to be neutered yet. The secret to having a tomcat in the house who doesn’t spray is to have them neutered as soon as possible, so we’re quite anxious to get this done just has soon as he’s ready.