Every morning, and again every evening, Harland does his chores. This time of year, this means feeding the calves and bulls. The cows are still out in the cornfield cleaning up what the combine left behind and are pretty self-sufficient right now. The calves, born last March and April, were weaned in November and are now in a lot at the farm, which is up the road from our place about a mile, and is where Harland grew up. The calves are now on hay and grain, and sometime next month, will be sold at the cattle auction. They have hay available to them all the time, and get a grain ration twice each day. 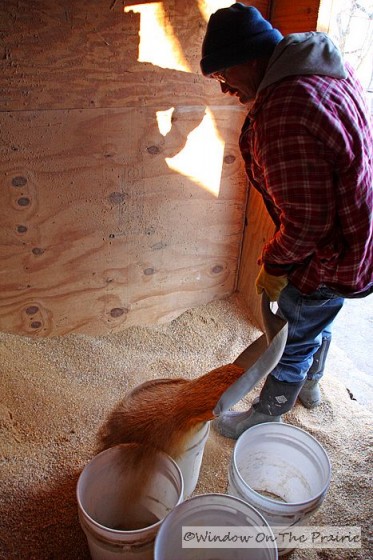 The calves love grain and gather eagerly at the trough. It’s a mixture of oats, corn, soy meal, distiller’s corn (what’s leftover after ethanol production) and flavored with sorgum molasses. Next, he pours out the grain into the trough and most of the calves dig in. 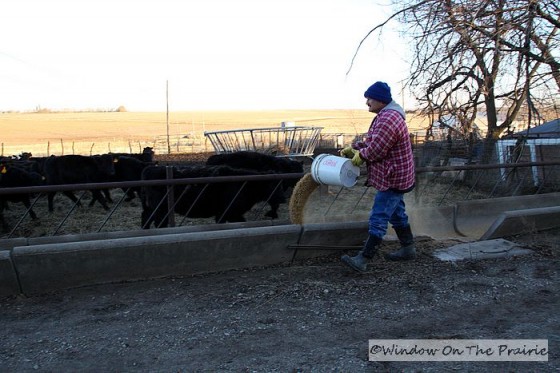 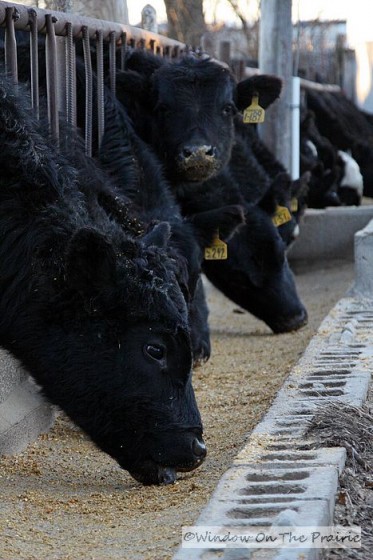 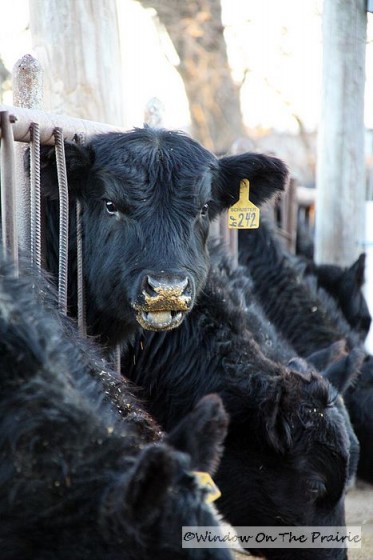 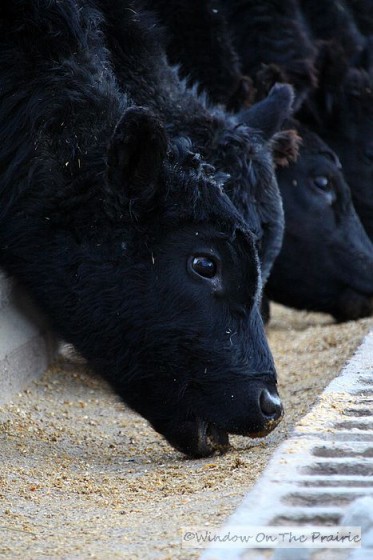 Some are kinda shy and are reluctant to come up to the trough, so he fills another small trough for them out in the lot. 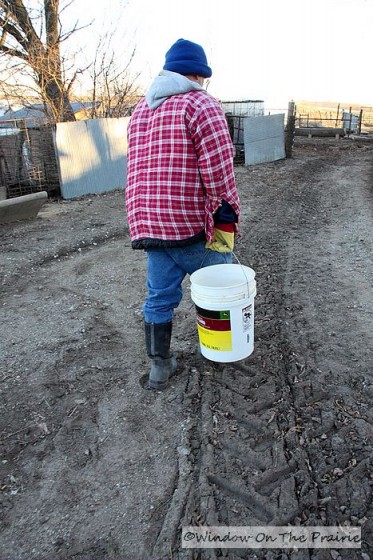 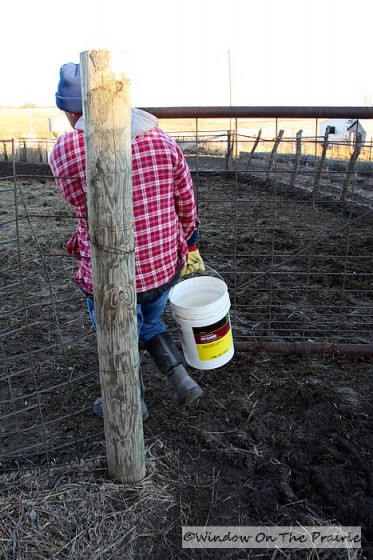 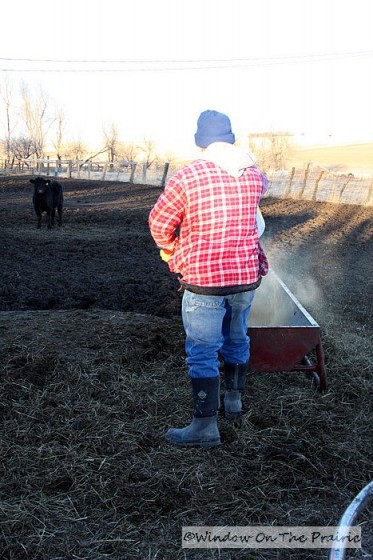 Next he takes care of the bulls. We have 2 right now, and this time of year they are in a lot by themselves. 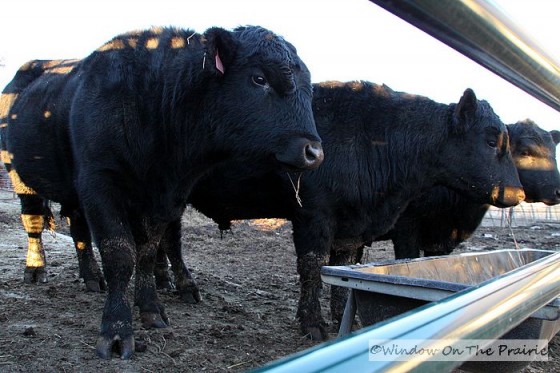 George, left, and Fred, middle, are each  2 1/2 years old. Bob on the right is 2.  Bob is a steer (castrated bull). Up until this summer, we thought he was a heifer (young female).  Whoops.  Bob will serve his purpose when we run low on beef in the freezer. 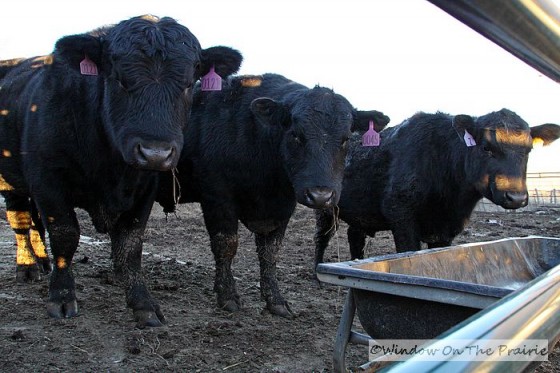 While we’re looking at the bulls (and Bob) here, I just have to say that these are the most benevolent looking bulls I’ve ever seen. They look so shaggy and hugable don’t they? 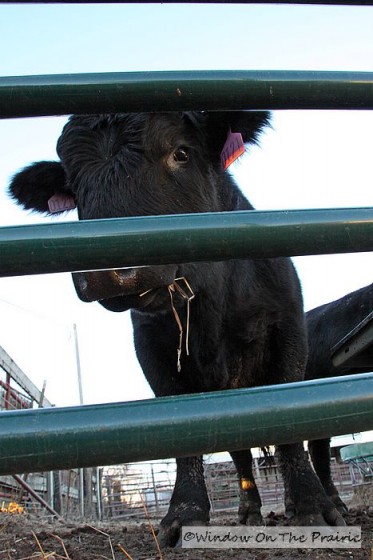 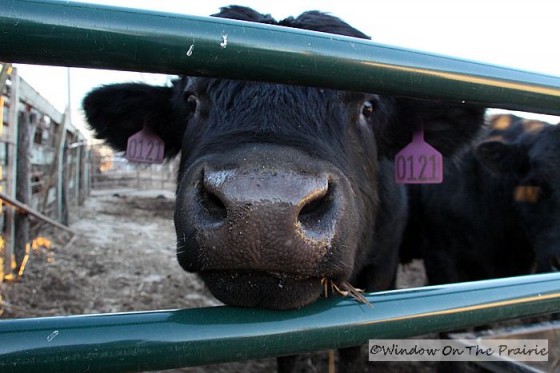 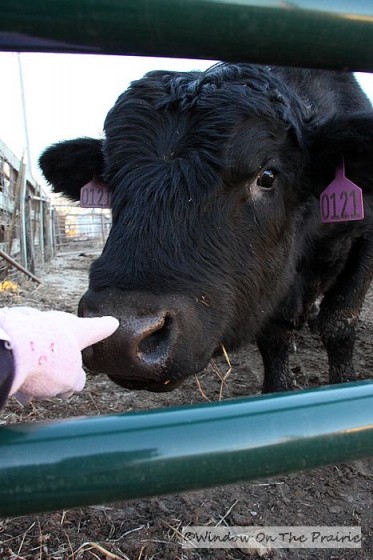 Anyway, they get a ration of grain too. 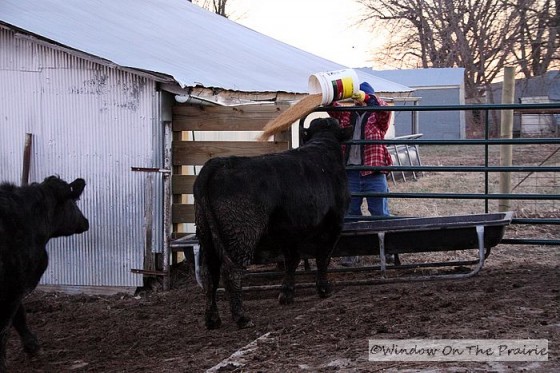 This evening they were also low on hay so Harland gave them another bale. 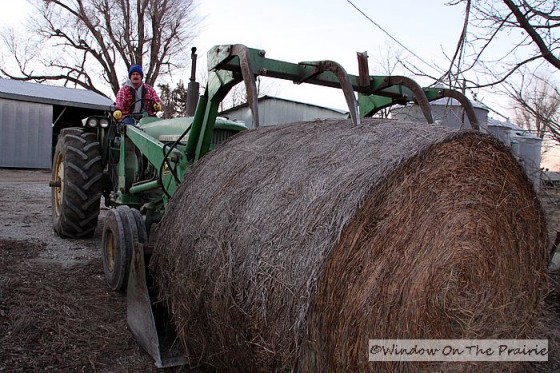 This is one of the bales Harland put up last summer. After the bale is put in the hay hoop, 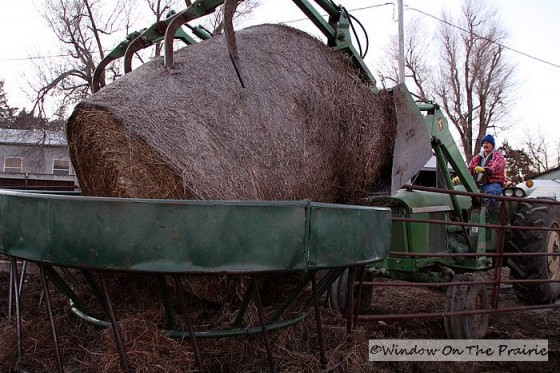 Harland puts the tractor away, returns the grain buckets to the grain shed, 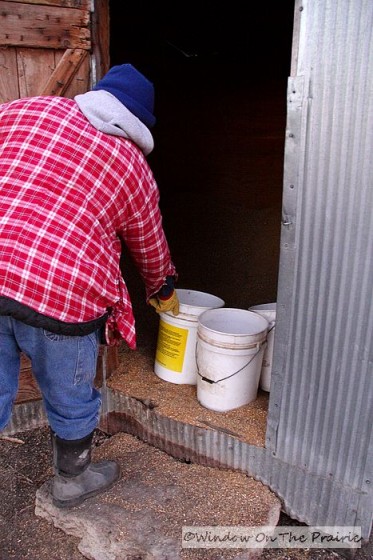 and heads back to our place down the road.

This is what the chores consist of from November through February at which point the cows (pregnant now) will be brought in off the cornstalks and put in a small pasture near the house. Harland will feed them hay and also check on them several times each day to assist if any of them have trouble calving, and to vaccinate new calves.

Our busiest time of the year with the cattle is just around the corner. Stay tuned.

—->  Tomorrow: An Update on Panda Calf.  He’s growing like zucchini in July.