Pedee Creek and the Snowy Woods

Pedee Creek is a narrow little stream that has its start just north of the Kansas/Nebraska line and meanders its way down into Kansas emptying into Pony Creek a few miles from where we live. The creek is named after the Pedee tribe who are a nation of Native Americans of the southeast United States.

Last Saturday morning we visited Pedee Creek and surrounding woods after a snowfall the night before.

It was a still day and the snow had blanketed every surface it could cling too. Occasionally, a little breeze would stir the flakes causing them to drift to the ground.

Here’s an image Harland took of the road through the woods near the creek: 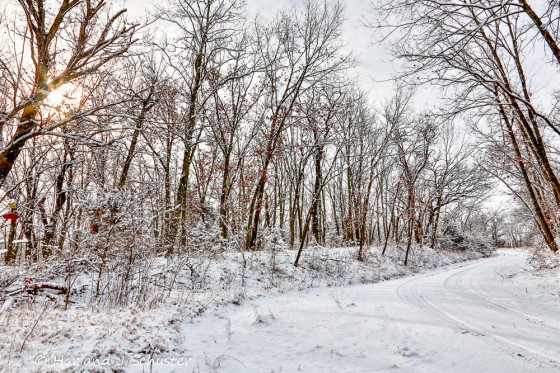 And here’s a little video I took of the woods and creek. It was so quiet that day that the only sound was the water rippling over the rocks in the creek. Away from the creek in the woods silence reigned.

Most of the snow melted later that day, but it was pretty while it lasted.