Last night I got up about 3:30am for a call of nature, and while I was up I noticed there was food in Kitty’s pan. We have an autofeeder that feeds her in the middle of the night and when it goes off, she is right there waiting, and gobbles it all up at once.   But as I stood over the half empty food pan, Kitty came over and made a half-hearted attempt to eat some of it. Finally, she gave up and walked away. For Kitty to walk away from food usually means she must be sick, but she appeared to feel fine, so I went back to bed.

This morning, her feeder still had some food in it. Very odd. And when I filled her water dish, I noticed that she had nearly drunk it dry in one day which is very, very odd. But Kitty was sitting very contentedly on the floor and as I felt her ears to see if she had a fever, I noticed she was purring like a little freight train. She never purrs if she’s unwell. So we got ready for work, I kissed Harland goodbye, and as I was going out the door I noticed a bag under the table. I came back and pulled it out.

It proved to be the solution to our little Kitty mystery. It was….

A bag of turkey jerky.

The bag was half empty, and it had a telltale hole chewed into the plastic by someone with sharp pointy teeth.  Hmmmmm……

Someone had had an illegal midnight feast.  This explained her inability to eat her regular feeding, and also why the water dish was nearly empty – jerky is very salty.

We always keep any food items she might be interested in out of her reach, but the bag of jerky had been brought home and left in its shopping bag on the table. We had simply forgotten to put it away out of reach. Ever vigilant Kitty had found it though and wasted no time in the cover of darkness last night, tearing into the bag and gorging herself.

At noon today Harland sent me a pic of our little glutton: 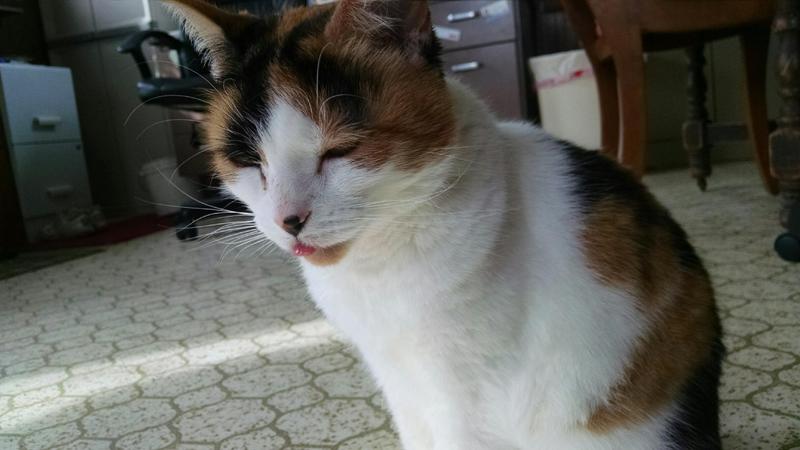 If you look close you can see her little pink tongue was sticking out when Harland took her pic, which is appropriate for how she feels right now.

We’d like to think this will teach her a lesson…

What do you think?

Yeah, we don’t think she’ll learn anything from this either.

UPDATE:  One day later, and multiple trips to the litter box, Kitty is feeling much better and back to her old self. Whew! – Yet another Kitty health crisis behind us.