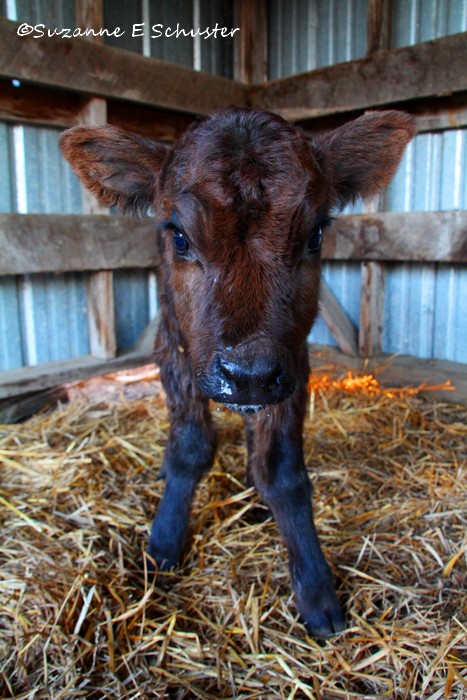 Monday morning when Harland checked on the cows he noticed one of them had had a calf in the night. He got the cow and calf, a rather small one he thought, out of the lot, eartagged the calf and turned them both out into the pasture with the other cow/calf pairs. He wondered why the calf was so small, only about 60-70 pounds, (most of our calves are 80-90 pounds) but didn’t give it much thought after that.

The next morning, another cow had had a calf, and as he was getting them up out of the lot he noticed a lone small calf, going from cow to cow trying to nurse. Poor thing.  No one would let her nurse so Harland decided some cow must have had her in the night and rejected her. He got her up out of the lot and put her in a pen. Then he looked over the cows trying to find the bad mom who had rejected her baby….but no one appeared to have had a calf.

Where did she come from?

And why was she so small? 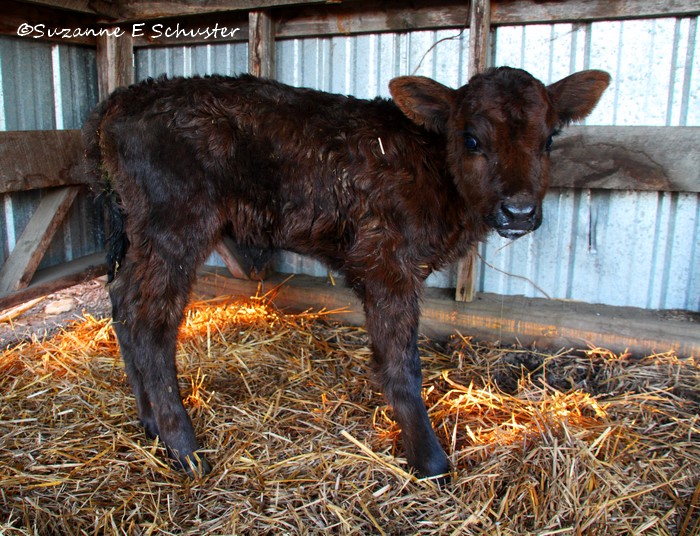 A-HA!   Twins!   This one was a twin to the small one from the day before!

Cows are programmed to take care of only one calf at a time..it’s nature’s way. So when a cow has twins, she’ll mother one of them and walk away from the other thinking it must be someone else’s. When Harland found the cow and her newborn on Monday morning, he didn’t see any other calves. The little rejected calf must have been curled up somewhere out of sight, so he didn’t notice her until the next day.

After Harland found the rejected calf he put her in a pen, and gave her some colostrum, antibody-filled first milk that calves normally get from their moms in the first 24 hours of life. It’s essential to having a strong immunity against illness and only works in the first 24 hours. The calf was more than 24 hours old now, but it was worth a try and hopefully the calf had possibly nursed at birth before she was rejected.

When I got home from work, I watched as Harland gave her evening bottle. Calves don’t naturally take to bottlefeeding and it’s a bit of a wrestling match at first. It usually takes a couple days before they figure it out. (We hadn’t checked the calf’s sex yet so we kept mistakenly calling it “he”.)

After she finished her bottle, she was a little slobbery: 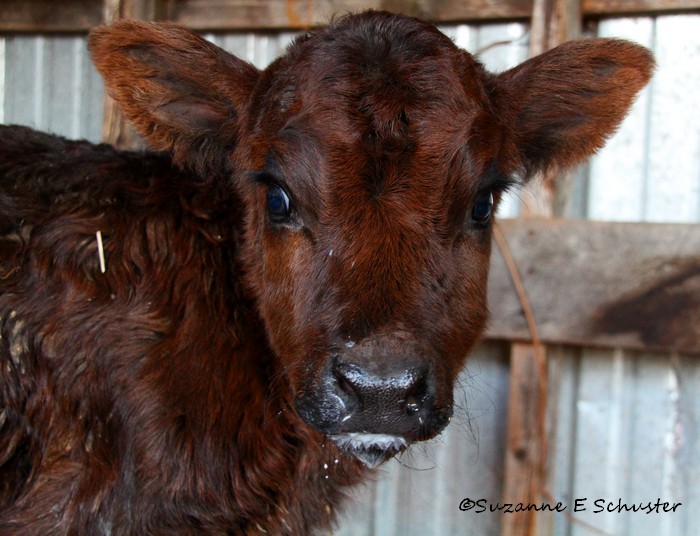 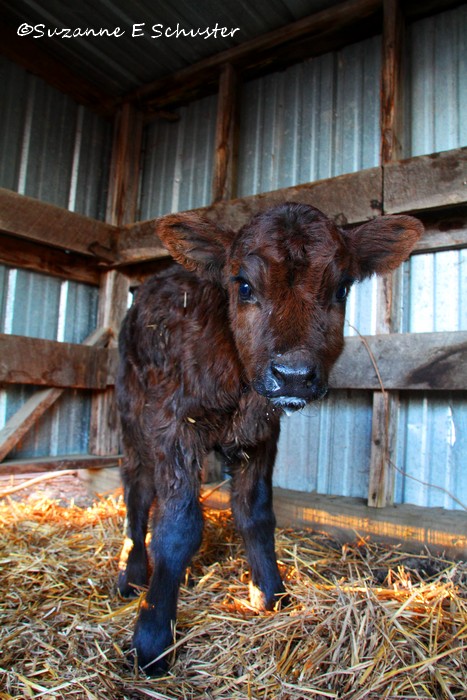 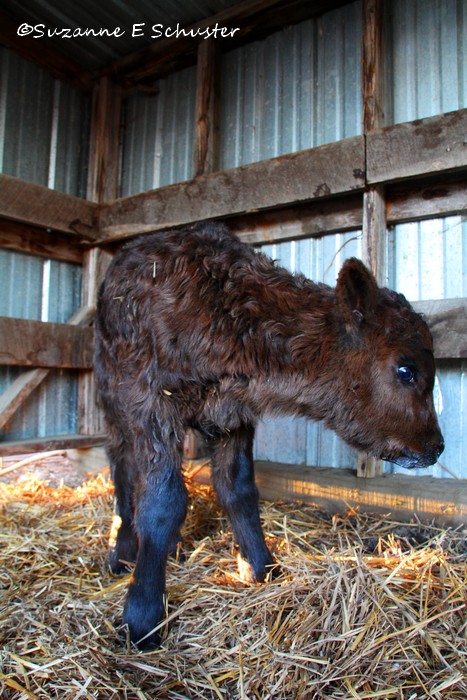 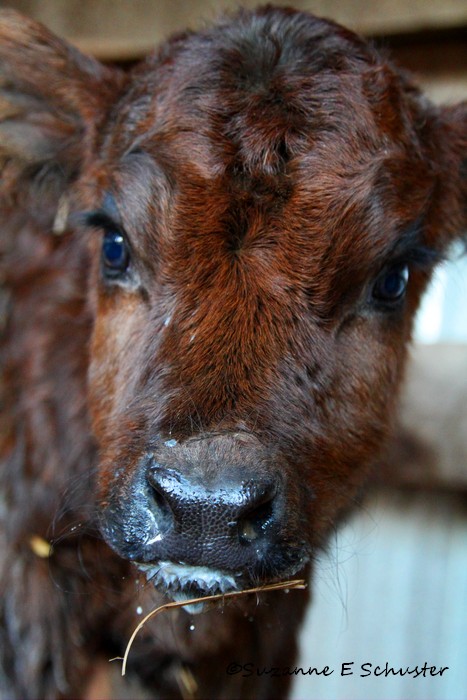 She’s just so adorable. I’ve named her Daisy. So delicate, so precious…so…so….

So unlike this creature! 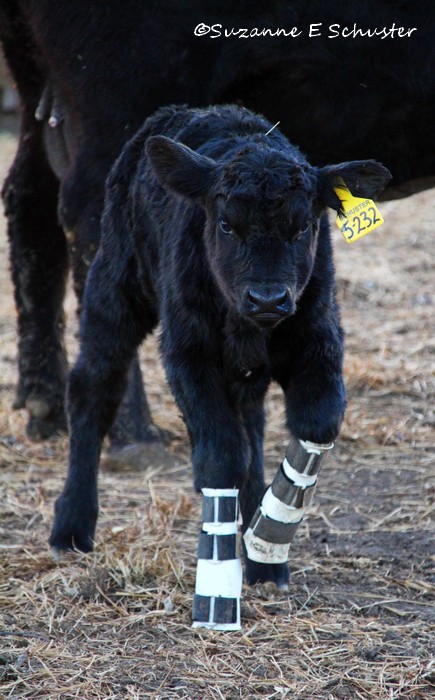 The same day Harland found Daisy, this creature was born. He’s huge! Unlike Daisy’s delicate 60 pounds, this calf weighs in at about 110 pounds! He’s SO big and was curled up SO tightly in his mother’s uterus that his front leg tendons didn’t grow right and were contracted, preventing the calf from straightening his legs out and standing.

Harland put him in a sling on the back of the four-wheeler and hauled him up out of the lot and into a pen with his mother following closely behind. Then he put leg braces on the calf and sent me a text:

“The latest in calf fashion.”

The braces straighten out the legs stretching the tendons and providing support for the calf to stand. Contracted tendons are a common problem in calves that are very large. It also occurs in young horses, and I saw a nature program one time on TV with a baby elephant that had it. 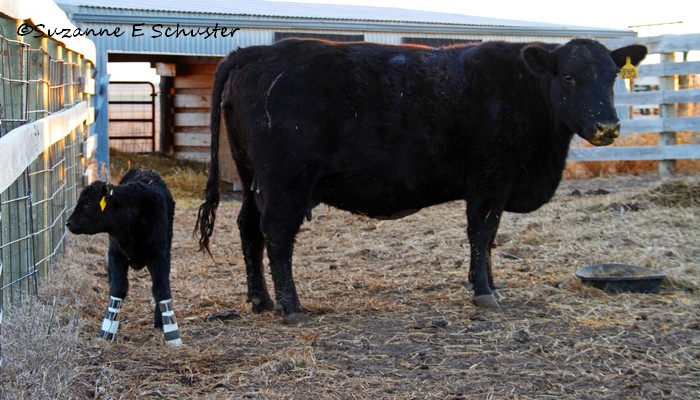 Hmm…He’s so big, he kinda looks like a baby elephant. 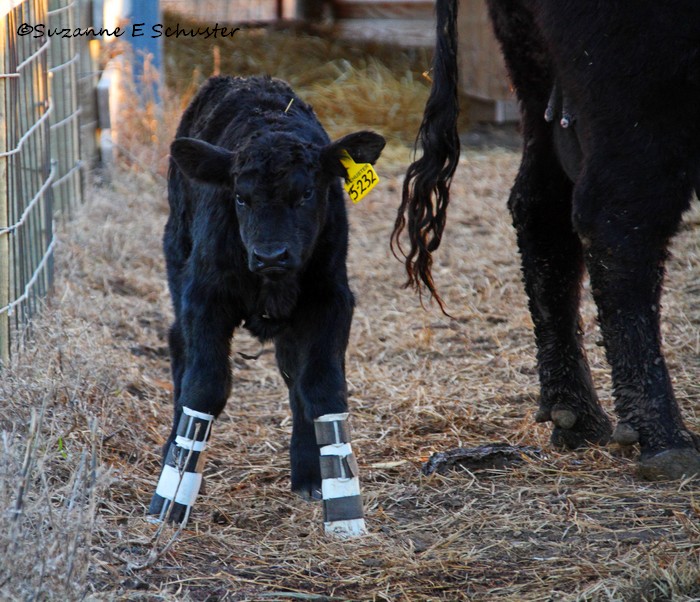 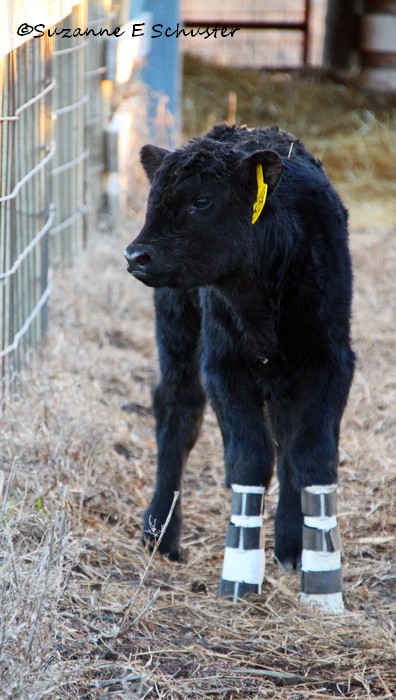 The braces are kept on for a few days and then removed. By then, the tendons have stretched out allowing the legs to straighten on their own and the calf to walk normally. We get at least one calf like this every year.  Harland will probably remove the braces either today or tomorrow, and then turn the cow and calf out into the pasture with the other cow/calf pairs.

We’ll keep Daisy as a possible replacement calf if one of our cows loses a calf at birth.  We hope it doesn’t happen, but for Daisy’s sake it would be a good thing as she’ll grow better and be happier with a real cow mom. 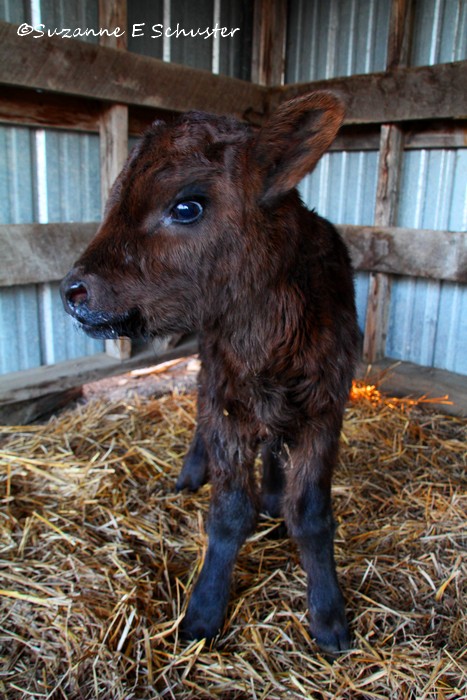 But until/unless that happens, we have a bottle calf to feed and love on.   Awwww….you cutie you!