Flush with my successful morning chore session yesterday morning, and proud of myself for holding down the fort in Harland’s absence, I headed home from work actually looking forward to the evening chores. This will be a piece of cake I thought. I’ll get this done in two shakes of a lamb’s tail, and then the evening is all mine. I can even watch a chick flick.  I came down the road and as I neared the house I noticed there weren’t any pregnant heifers in the the lot where there should be 4 of them. Hmmm….maybe they’re in the barn. Odd, they don’t usually go in there this time of day. I turned into the drive, looked up towards the barn and saw that the gate that separates the heifers from the cows with calves was wide open. My idyllic vision of easy chores and free evening melted away like snow in July.

Everyone – heifers, cows, and calves were all in the pasture having a party. Most of them were around the hay ring/buffet table sampling the food. The rest of them were scattered around the pasture/dancefloor kicking up their heels – literally. After I dragged myself into the house and changed into my farm girl clothes, I drove a mile up the road to the farm to get some grain. Getting cattle to do anything is more easily accomplished with grain. I also called a neighbor for help.

When we all got back to my place, I coaxed all the cattle into the small lot with the grain with my neighbor Charlie, his wife Jane, and another neighbor, Stuart bringing up the rear pushing the cattle in. Once inside the lot, we began to figure out who could go back out into the pasture. Cows and calves belong out there, pregnant heifers stay in the lot. But in the mix of cattle it was hard to figure out who was which. After a while though, the cows and calves paired up and so all of them were released back out into the pasture where they took off running to the far corner to get away from the evil humans. Now there are only supposed to be 4 heifers in the lot. But we counted 5.  If one of them was a cow who had a calf out in the pasture, she sure didn’t seem upset about being separated from  it. But numbers don’t lie, and one of them had to have already calved.  So we decided the best way to figure out which one was her was to wait. Sooner or later the guilty party would bawl for her calf and give herself away.

Charlie, Jane, and Stuart left to take care of their own chores, and I called Harland. He gave it some thought, and suggested I look for cow #191 as she had calved  just a couple days ago. This made sense because newborn calves in the first few days of life lie low and sleep most of the time in a corner of the pasture. In all the hubbub we wouldn’t have noticed him because he was probably curled up somewhere in the deep grass. So I got off the phone with Harland, and decided I was going to sort #191 off by myself and get her back into the pasture where she belonged.

So I hatched a plan where I would chase her from the lot and into the barn, closing the gate behind her, and then open the gate on the opposite side of the barn that leads into the pasture. Easy. I got behind her and she went into the barn. Before I could close the gate on her though, 2 of the heifers joined her. Great, now I had to sort them back out.  It’s kinda hard to get just one cow to go anywhere without her neighbors wanting to go along too.  It’s a herd thing.  So I opened the gate a little and walked towards the three of them. One of them went back into the lot. Great, only one more to go. After making several attempts to get just the heifer out of the barn leaving cow #191 inside, I finally succeeded. Then I opened the other gate releasing her into the pasture. She stood for a moment looking about her trying to get her bearings, and then her lightbulb went on, she recognized where she was and that somewhere in the pasture she had a calf. ‘Oh yeah, I have a kid!” She bawled loudly for it. I closed the gate to the barn, finished my chores and went to the house.

Kitty was bouncing around wanting to be fed. I told her it wasn’t feeding time yet and she had to wait until 7:30. (We have Kitty on a strict feeding schedule otherwise she would balloon up into a 100 pound Kitty) Anyway she continued to tapdance around me as I shed my coveralls, crying and purring at the same time. I finally looked at the clock to see what time it was and let her know how long she had to wait.

It was already 7:30. I’d had so much fun doing chores I hadn’t realized that 2 hours had slipped by.  So I fed her, fixed myself a quick supper, and fell into bed. So much for my free and easy evening.

This morning, when I did the chores, all the gates were closed, and everyone was where they should be. There was a gorgeous pink sunrise and the world was a beautiful place.

——> UP NEXT: Come along for a controlled spring burn on the prairie. 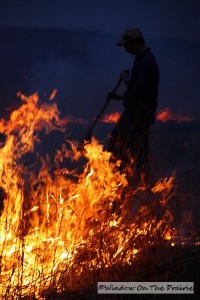