Turning The Herd Out Into The Pasture

Finally, finally…. after working our cattle herd for almost 12 hours, the best part of the day had arrived:

It’s always a wonderful thing to watch our herd as they trot away from us, disappear over the hill, and down into the valley. It’s the culmination of not just a day’s work of sorting, shots, loading and hauling to the pasture, but a successful culmination of months of work that started back in early March when the first of the year’s calves hit the ground.

Every new calf was looked over and watched carefully to ensure that it was healthy and nursing from it’s mother. Each healthy new calf and it’s mother were separated from the herd and turned out into a small pasture with other new calves and their moms. Calves with problems, like an inability to nurse, crooked legs, joint ill, scours, or other illness received special attention from Harland for days and sometimes weeks, until they were fit enough to join the herd.

There were losses too:  there was a premature calf back in February, born dead. There were two calves born on a cold snowy March night sometime between 3am and 6am – both froze to death. These losses were heartbreaking, and felt deeply by us.

One morning, Harland found a cow, lying flat out on the ground, close to death. He called the vet who came out and treated her for grass tetany, a calcium deficiency also known as milk fever. Fortunately, she was caught just in time and after a about a week was healthy again.

This year we had three sets of twins, a record for us, but not an enviable one. Twins are not necessarily a good thing. Most cows can’t mother two calves well, so we end up pulling one of the calves from her and letting her raise the other. Fortunately, we were able to foster two of the twins to the cows who had lost their calves. The third twin didn’t have a cow available to foster to, so we kept her as a bottle calf.

One by one, as each calf was born, days and weeks flashed by in a blur of cows bawling to newborn calves, prepared milk bottles given to weak calves, calf splints for crooked legs, worry-filled snowy days, rainy muddy days, new spring grass, and expressions of wonder on little calves’ faces as they looked at the world for the first time.

Not lost in the shuffle was our perennial wonder about miraculous births, perfectly formed little calves, and first-time moms who took to mothering their little ones like they’d done it a hundred times before.

So it’s with a great feeling of accomplishment as we watch the herd run away from us into the lush green world where they will live for the summer. Harland will check on them once a week, but otherwise they’ll take care of themselves. The calves will grow and grow, increasing their weight 4-5 fold before fall comes. The cows will become pregnant again soon, with calves they’ll carry within them until they birth next March, and the annual cycle starts all over again. 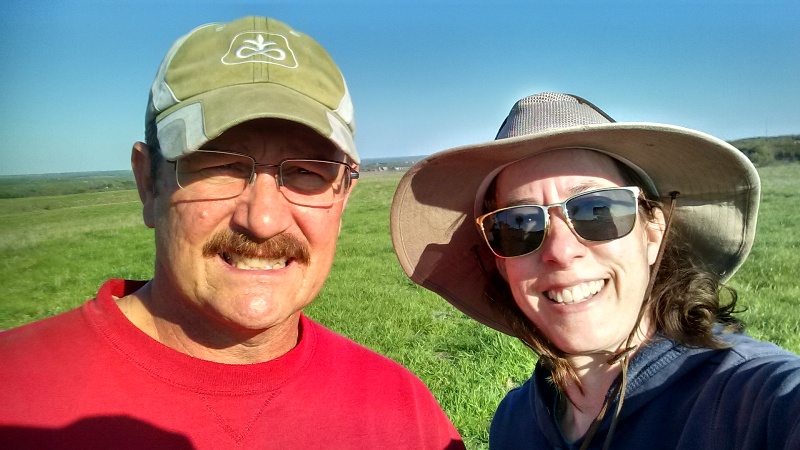 Harland needs to work on his selfie smile.

Tags: Turning The Herd Out Into The Pasture