Out In The Pasture

A few pics today from the pasture up at the farm:

I love the color of this calf. It’s the perfect shade of chocolate mocha. 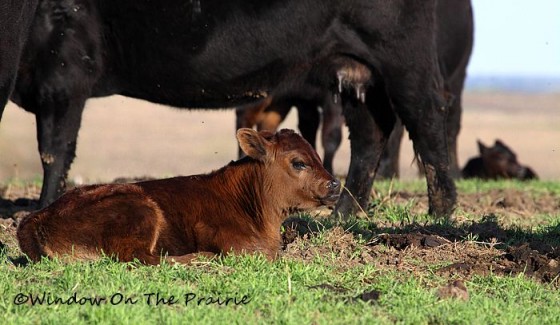 I like how this calf is tagging along right behind his Mama, single file-follow the leader. She looks like she’s on a mission, probably headed to the waterer for a drink. 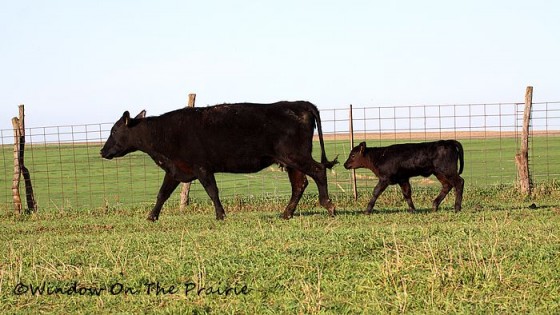 I watched as this cow grazed towards her calf and when she reached it, she stopped to clean it up a little bit. 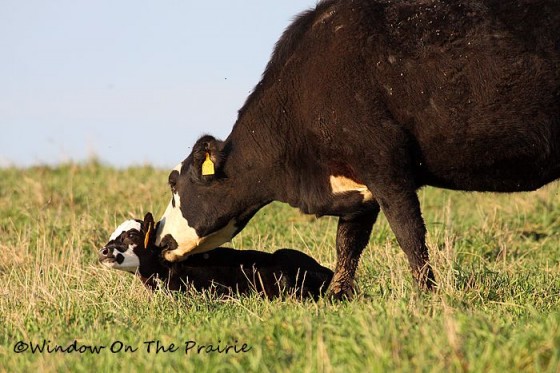 Being near her calf must have triggered the let-down of her milk – check out her udder: 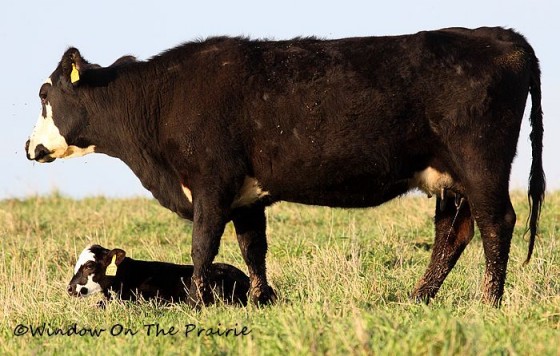 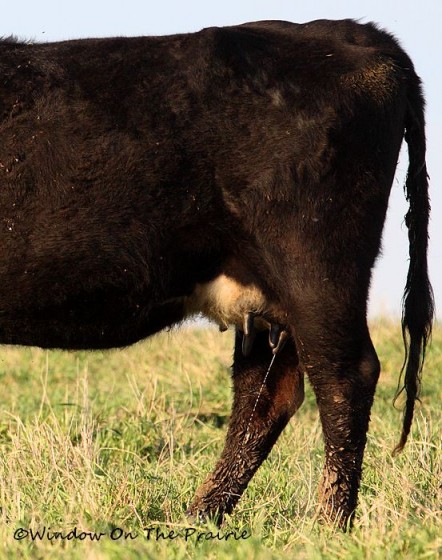 I love the color and markings of this calf. Very pretty. 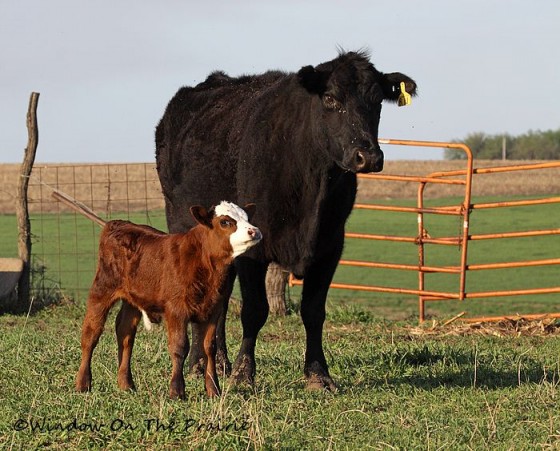 Sadly, a few days after this pic was taken, Harland found the calf dead in the pasture. No idea what might be the cause. He had been poorly about a week earlier, and Harland had given him an anitibiotic shot, and he had improved after that. The day I took this pic, he was hopping about and bright-eyed. It’s a hard thing to lose a calf despite all our best care and precautions.

Luckily we rarely lose calves, so there are plenty of healthy ones to cheer us, like this one happlily snoozing while his mom grazes. 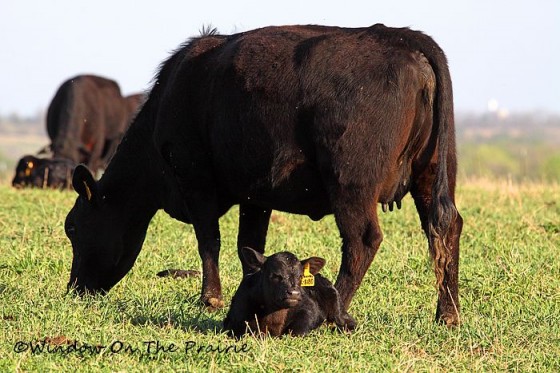 I have to share with you the pics below of my favorite cow. Her name is Dolly the Wonder Cow. Not sure how we gave her that name, but it stuck. 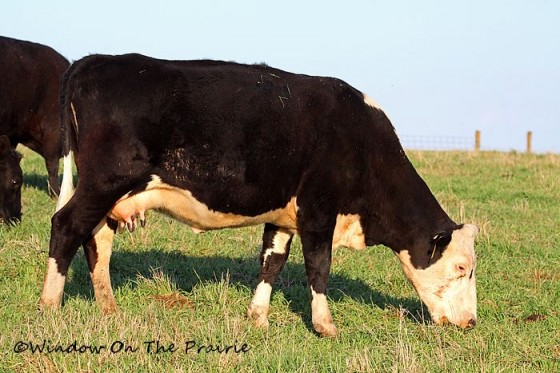 Hey, Alica over at Happily Married to the Cows, does she look vaguely familiar to you? Look like any cows you know?

Dolly stands out in our herd because she’s mostly tame. She was a bucket calf and was handled a lot before we got her a few years back. She follows Harland around so closely at times that he refers to her as the “1000 pound fly”.

But she also stands out due to her appearance. She’s all right angles and long legs and boxy head. And her udder is much larger and mostly pink. 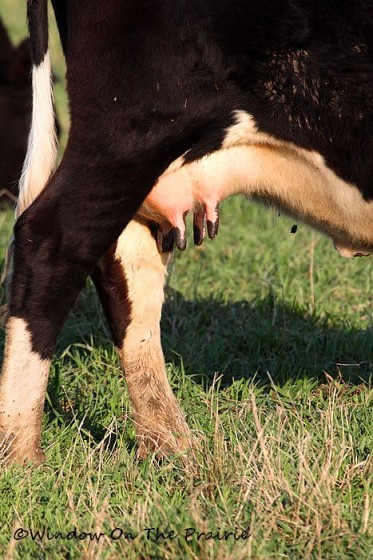 If you’re thinking she looks more like a milk cow than all our beef cows, you’re right. She’s half Holstein (dairly cow) and half Angus (beef cow). 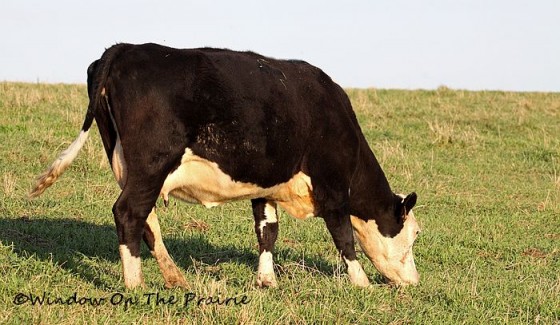 She’s a mutt, but she is a good mama and has enormous calves. They look like ponies from day one. Sadly, the herd doesn’t care for her because she’s different, and they kinda shun her. Most of the time she can be seen grazing calmly around the edge of the herd by herself. But she doesn’t seem to mind or even notice. I can’t help but like her for this.

The spring green is growing by the day on the prairie. 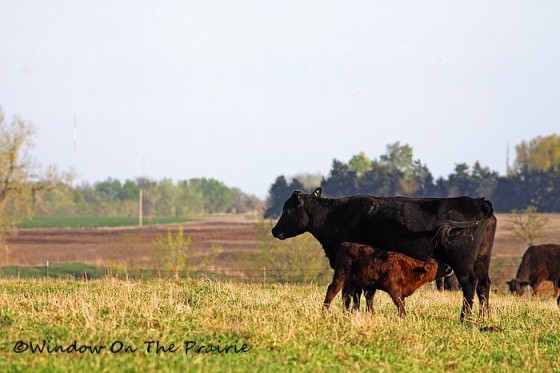 The lush green you seen in the field in the distance is winter wheat planted last fall. It will mature and be harvested in June.

And this week Harland has been putting in long days and evenings planting field corn. Soon green shoots will replace the brown of the fields. 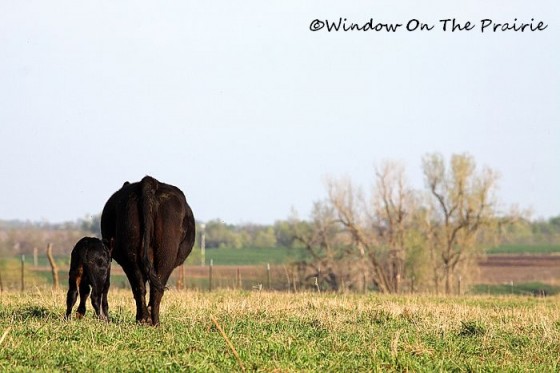 Hope spring is progressing peacefully along where you live.