Mabelle of the Maternity Ward decided yesterday was a good day to have her long-awaited first calf. You’ll remember she’s the one who,

“has been looking forward to this moment all her life. When not eating hay, she can be found knitting little booties and receiving blankets”

Mabelle saw Harland leave, so she decided this would be a good time to give birth without unwanted “interference” from the male human.

It was a difficult birth as the calf was rather large, but she managed it at last. She got to her feet right away and cleaned it up thoroughly talking to it softly, encouraging it to stand. At last, a little calf of her very own to raise and love.  All was right with her world ……. for a couple hours.

Then Harland showed up.

“Rats, it’s that pesky farmer. What does he want?” she thought.

He picked up her baby, (“he’s touching my baby….argh…human germs“), and took it into the barn. (“ok, so this isn’t so bad, some privacy for me and junior“)

Then Harland noticed that the calf hadn’t nursed, so he tried to feed it some colostrum. But Mabelle wouldn’t have any of it. She threatened Harland by waving her head at him bad-temperedly and tap dancing around – common behavior for a cow who’s had several calves, but not so common for a first timer like Mabelle.

So Harland put her in a separate pen from the calf for his own safety, and proceeded to feed the calf colostrum, dip it’s unbilical cord stump in iodine to prevent joint ill, and give it a pill for scours – all just preventative medicine. When he was done, he let Mabelle back into the pen with her baby and left the two of them alone.

Mabell ran to her calf. 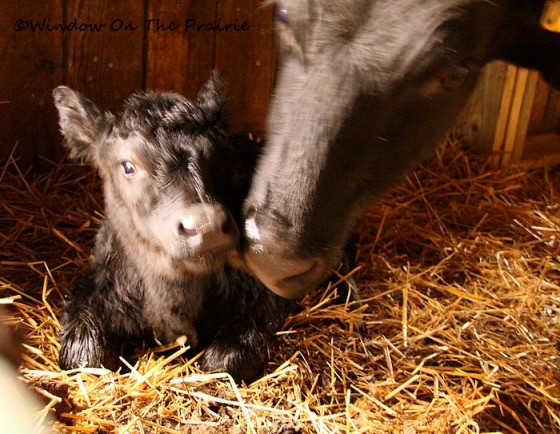 “Oh..Oh…are you ok Junior?  What did that mean nasty man do to you? I’ll protect you, don’t you worry.”

“I’ll be here to save you from the wolves and hyenas.” 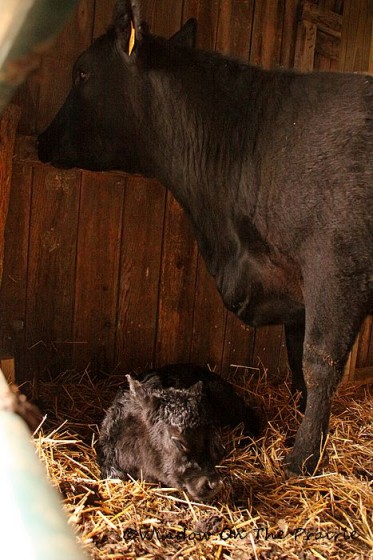 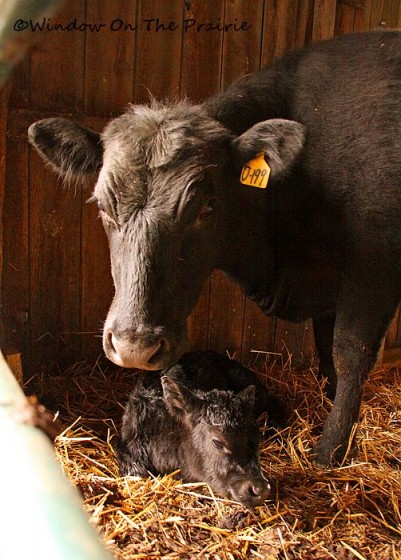 Me:  “Uh, Mabelle….don’t you think you might be overreactinig just a little?”

Me:  “Mabelle, we don’t even have wolves or hyenas, and Harland was only helping your calf. He’s trying to make sure your baby doesn’t get any illnesses after all.”

Me:  “You’re a nervous Nellie, but that’s ok, we know you’ll be a good attentive mother.”

Mabelle:   “I heard that! I’m am not a nervous Nellie! Out, OUT…begone HUMAN!”

And everyone have a Blessed Holy Thursday today!